That’s What She Said Edition

END_OF_DOCUMENT_TOKEN_TO_BE_REPLACED

I’ve spent most of my adult life assuming that technology was in an endless upward spiral that would always provide me with a never ending supply of a) fast computers, b) cheap storage, and c) massive bandwidth. You can imagine my surprise when I recently discovered that we are apparently on the verge of a global bandwidth shortage. If true, that would certainly change most of my assumptions about the future of media, computing, and civilization as we know it.

My first inkling that we might have a serious problem came last week when a Google representative, speaking at the Cable Europe Congress, announced:

The Web infrastructure, and even Google’s (infrastructure) doesn’t scale. It’s not going to offer the quality of service that consumers expect.

END_OF_DOCUMENT_TOKEN_TO_BE_REPLACED

It’s a special Valentines Day exclusive from Medialoper! There is nowhere else in the world where you can read this exact story!

Coming up later in this post, the story of my night of passion with Anna Nicole Smith!

END_OF_DOCUMENT_TOKEN_TO_BE_REPLACED

It Looks Like Ted Stevens Was Right After All Edition 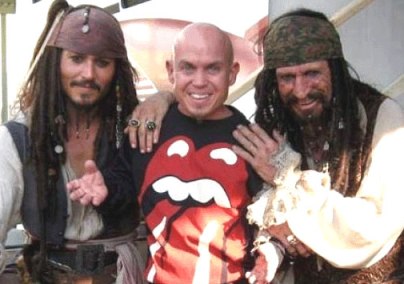 END_OF_DOCUMENT_TOKEN_TO_BE_REPLACED

I’ve started and stopped a good half dozen posts about the Viacom/YouTube breakup. Like most business deals, this one came down to money. The amounts offered by the Google team didn’t meet Viacom’s notions of what their programming is worth. This makes me wonder if Viacom has a clue how the Internet works — to date, I have not seen evidence that anyone is better at leveraging online eyeballs and advertisers than Google.

For all of the press and hype, it is still not known whether or not YouTube is just a flavor-of-the-month. The kind of audience we’re talking about is very fickle. Yet, the evidence shows that right now, the viewers are at YouTube. Water cooler discussions make it clear that the site is the first, second, and third choice for those who don’t TiVo — “I’m sure it’s on YouTube” isn’t just conversation, it’s a belief.
END_OF_DOCUMENT_TOKEN_TO_BE_REPLACED

While you were busy getting booted from the Shuttle Program or claiming to be Anna Nicole’s baby dady, this is what we were up to:

Via PopMatters and TechDirt I was led what looks like an older page on the RIAA’s website which posits that we have actually been underpaying for CDs for the last decade. Apparently, by their math, we should have been paying $33.96 for a CD in 1996. Hee. Imagine the downloading if that was the case. The internets would have been shut down from the traffic by 1998.

Translation: art is priceless, but we can put a price on it. So remember that beautiful, poetic thing that we just wrote about the whole pricelessness of the creative process? Don’t.

But I digress. My subject was the RIAA’s assertion that CD prices have been a total and utter bargain for lo, these many years. And while I will leave it to people much smarter to me to point out why the RIAA’s logic is so terribly wrong, it got me to wondering: what else does the RIAA want you to believe?