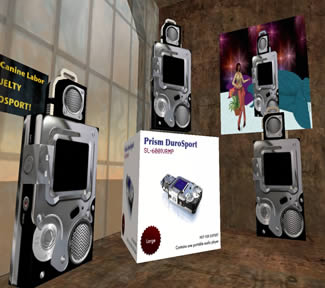 The first thing you notice is the boxes. The huge, huge boxes, piled high on top of each other from the floor to the airplane-hangar sized ceiling.

What, you wonder, could these gigantic boxes possibly contain? The only possible items are washers and dryers, refrigerators, sofa sets, even SUVs. Maybe a really huge television. But if you’re the DuroSport Electronics Corporation, then these impossibly large boxes contain your latest product: a portable virtual media player.

During the past year we’ve had more than our share of laughs over the ongoing foibles of the DuroSport Corporation. From the company’s unbelievably bad portable media player to an embarrassing t-shirt recall last summer, it sometimes seems like DuroSport can’t do anything right. As it turns out DuroSport’s problems are not the result of poor engineering and horrendous customer service. No, according to company officials DuroSport has been victimized by “the current technological limitations of reality.”

So what’s a consumer electronics company to do when reality lets it down? Open a store in the virtual world known as Second Life, of course.

END_OF_DOCUMENT_TOKEN_TO_BE_REPLACED

It’s probably no secret that many of us ‘Lopers are ex-denizens of the great Central Valley of California. We all fled the land of raisins, heat, and smog for a variety of reasons (for me it was the educational opportunity at a UC school). However, there remain behind some last bastions of civilization who continue to ply their craft, whatever it may be. I have many friends and family members who continue to fight the good fight against the forces of ignorance and darkness that litter the valley floor like so much white trash.

One person in particular who seems like a lonely voice in the wilderness is the self-styled War Nerd, Gary Brecher. He is hands-down Fresno’s, and good lord, maybe the country’s, foremost authority on the history and art of war, considering he spends (by his accounting) upwards of eight hours per day researching the subject. But Brecher is more than just a pimply-faced geek who fantasizes about slaying hordes of orcs and trolls in his next Dungeons & Dragons campaign. He is a writer of uncommon capability who says things about the nature of war that we all want to avoid but secretly agree with. It’s a nasty business and even though the winners get to rewrite history into a simplistic good vs. bad metaphor, the truth is far more nuanced. The 115 columns Brecher has penned for a Moscow-based online journal called “The Exile” contain the kind of poetic verbal acrobatics that would bring tears to Lao-Tzu’s eyes.

END_OF_DOCUMENT_TOKEN_TO_BE_REPLACED

I Barely Have Time For My Life, I Don’t Need A Second Life Edition

END_OF_DOCUMENT_TOKEN_TO_BE_REPLACED

Buffy the Vampire Slayer has had many incarnations. Originally, it was a not-so-good movie starring Kristy Swanson and Luke Perry. Despite the lack of success, creator Joss Whedon was given a chance to do it again, and because the network he was on was still in the “we’ll try anything” mode, turned it into an brilliant, iconic TV Series starring Sarah Michelle Gellar.

That show was funny, sad, witty and at times, even operatic. It was also one of the most influential series of the past decade. After spinning off Angel — perhaps the weirdest TV show ever — it also spun right into the realm of the comic book.

END_OF_DOCUMENT_TOKEN_TO_BE_REPLACED

The Place Where No Cars Go Edition

END_OF_DOCUMENT_TOKEN_TO_BE_REPLACED

So, the MySpace is adding a news component to its slate o’features. Given that the parent company of MySpace is News Corporation, this isn’t so much of a surprise as it is a question of what took so long. I know it’s not because the company’s shy about self-promotion.

Online speculation has it that Newsroo, a company recently acquired by News Corp will be serving up the headlines to the movers and shakers of the MySpace community (this speculation is fueled by the fact that Newsroo’s home page now redirects to the MySpace homepage). According to one site, deals are being struck all over the news universe. This site also curiously refers to MySpace as a pureplay online company; that shipped more or less sailed when the site was acquired by a major media giant. Slowly but surely the influence of the Murdoch empire has crept into the site, and we recently received samplers from the MySpace music label. Now that they’ve lived with MySpace for a while, the folks at News Corp. are desperately seeking ways to squeeze every nickel and dime out of it
END_OF_DOCUMENT_TOKEN_TO_BE_REPLACED

END_OF_DOCUMENT_TOKEN_TO_BE_REPLACED

It’s not easy being an industry leader these days. The moment you hit the top, every time your competition releases a new product, it’s going to “kill” you. The Zune was the iPod killer. Microsoft’s new and improved search was the Google killer. And NBC Universal/News Corp’s new service is, naturally, being touted as the YouTube killer.

All which makes for violent headlines, but the proof, as we all know, is in the audience. It’s not enough to release a new service into the wild and expect it to take the Internets by storm. YouTube didn’t become the go-to online video service simply because it was there. And that is the lesson big media needs to learn.

I think it’s important to review what makes YouTube, well, YouTube. It’s obviously not the only video sharing site out there. Grouper, Revver, and a host of other services allow users to easily upload video. If rumors are to be believed, Revver is the place to go if you’re trying to make a buck off your work. But the zeitgeist — that intangible thing — is with YouTube. Users cross the myriad cultural divides. My mother-in-law finds stuff on YouTube, because YouTube is pretty close to foolproof. It’s designed for the casual user.
END_OF_DOCUMENT_TOKEN_TO_BE_REPLACED