Recorded at the Civic Auditorium, Pittsburgh on February 17, 1991

The first time I saw Neil Young & Crazy Horse was on the Smell The Horse Tour. It was at the Cow Palace in San Francisco on Saturday April 6, 1991. Jay drove Manny, Byron & I in his van, listening to the initial dubs of the Miss Alans Discordia shows the previous weekend on the way up.

At that time, I wasn’t in a great headspace: the second version of Sedan Delivery had just fallen apart, I was going back to CSUF to finally finish my degree, and I was also dealing with a lingering breakup, as well. And in fact, I was originally going to go the next night in Sacramento w/ John, Sherilyn & Doc — a show with way better tickets — but ditched them because I didn’t want any kind of responsibility at all, not even driving, which I was going to do, cos I had the best car. It was also a Sunday night show, and I had to be in class at 9:00AM on Monday.

END_OF_DOCUMENT_TOKEN_TO_BE_REPLACED

Recorded at the Capitol Center, Landover, on February 27, 1991

Sure, the version of “Welfare Mothers” that was on Rust Never Sleeps was great — and its placement on side two between “Powderfinger” and “Sedan Delivery” was a great way to lighten the otherwise heavy mood created by the former and set up the noisy surrealism of the latter — but it wasn’t quite deranged enough.

I mean, sure, screaming “welfare mothers make better lovers” over and over again is already setting a high bar of derangement from the get-go, which is why it’s impressive they were able to go right over the top on the Smell The Horse tour.

END_OF_DOCUMENT_TOKEN_TO_BE_REPLACED

But the best track on Ragged Glory kinda slipped in under the radar.

Unlike “Love To Burn” and “Love and Only Love,” “Over and Over” was under 10 minutes long; unlike “Fuckin’ Up” and “Mansion on the Hill” it didn’t have an instantly-memorable chorus; and unlike all of the above (plus “Country Home” & “Days That Used To Be”) it wasn’t played on the Ragged Glory tour, and apparently not played live ever until 2012.

END_OF_DOCUMENT_TOKEN_TO_BE_REPLACED

First off, while I am going to respect the original spelling of the song in the title, please let the affiliates know that, for the rest of the post, I am going to refer to this song as “Fuckin’ Up,” and not “F*!#in’ Up.”

Obviously, “Fuckin’ Up” wasn’t the single from Ragged Glory — that would be “Mansion on the Hill,” — but there was no question that it was the key track on the album, and we almost instantly learned it in the reconstituted Sedan Delivery, as the central question was one that we all could relate to.

END_OF_DOCUMENT_TOKEN_TO_BE_REPLACED

According to Jimmy McDonough’s invaluable Shakey biography, Ralph Molina and Billy Talbot were so pissed at Neil Young after being replaced for the Bluenotes in early 1988 that they weren’t even sure that they wanted to play with him again. So when Neil decided he wanted to do another Crazy Horse album in early 1990, they all met at the Harris Ranch Restaurant on the I-5 to discuss the possibility of recording together again.

END_OF_DOCUMENT_TOKEN_TO_BE_REPLACED 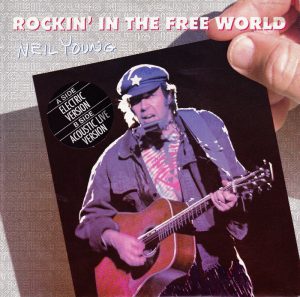 END_OF_DOCUMENT_TOKEN_TO_BE_REPLACED

From my standpoint as a lifelong Neil Young fan who discovered him at the very end of his amazing 1970s run, Freedom was probably the most important album he ever made. After a decade of wandering in the wilderness of his own muse, it was reasonable to assume that his best days were behind him.

And maybe they were, but I personally think that Neil Young was as much of a force to be reckoned with in the 1990s as he was in the 1970s, as Freedom kicked off a streak of good-to-great albums that in toto comprised a completely unexpected and utterly unprecedented second act.

END_OF_DOCUMENT_TOKEN_TO_BE_REPLACED

Neil Young found his way home, of course, but he took the scenic route. As you do.

In Neil’s case, after going back to Reprise Records following his unsuccessful stint at Geffen, he had his first minor hit single in quite some time. Well, not so much a hit single as a hit video. And really not so much a hit video as a banned video that won MTV’s Video of The Year back when that still meant whatever it had ever meant.