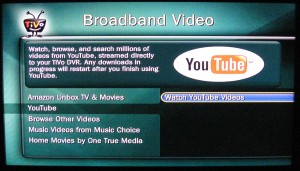 When we talk about “convergence” here at Loper HQ, what we aren’t talking about is getting our internet, cable and phone from the same evil multinational corporation.

Instead, we mean devices that combine several formerly disparate functions into a single, easy-to-use interface. Like, of course, the iPhone, which Tim Gaskill declared this weekend to be the greatest thing ever made.

While the iPhone is most certainly a major step in portable convergence, there hasn’t yet been a device in the home video space that allows me to watch a combination of internet video and recorded TV with a single, easy-to-use interface.

You know, the One Box.

Right now, due to a maze of rights issues, the One Box doesn’t exist, and may well never exist. One of the contenders is TiVo, which has smartly expanded its purview beyond the simple recording and playback of TV shows. Not only have they added dozens of Web video download options, they’ve also partnered with Amazon’s Unbox.

And now, you can watch YouTube on your TiVo.

TiVo HD and Series 3, that is. If you have an older version, you are out of luck.

So, how does it work? Let’s take a look. 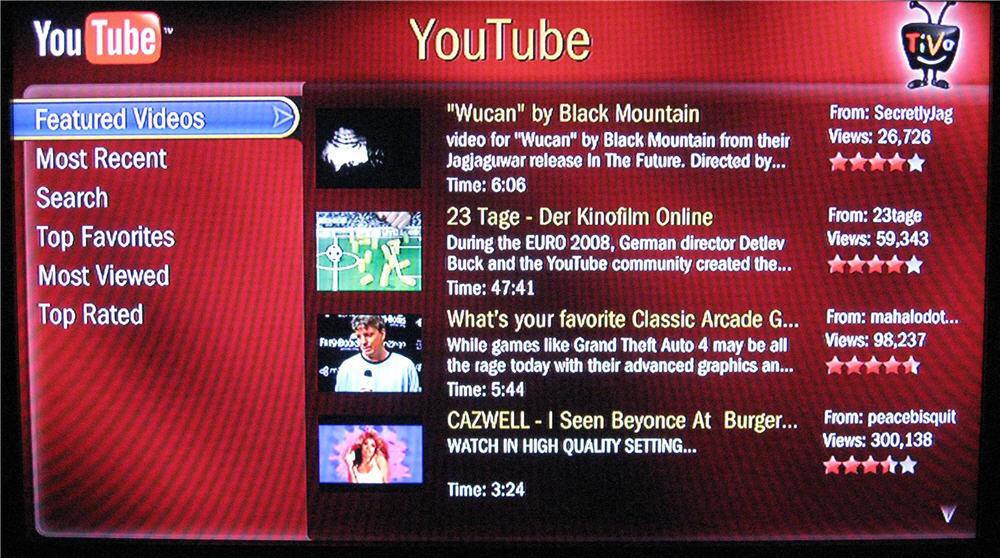 The first thing that you see is a small list of YouTube Featured Videos, along with a menu allowing you to use your TiVo remote to browse through other types of lists. It’s a pretty logical grouping: Most Recent, Favorites, Most Viewed, Top Rated. 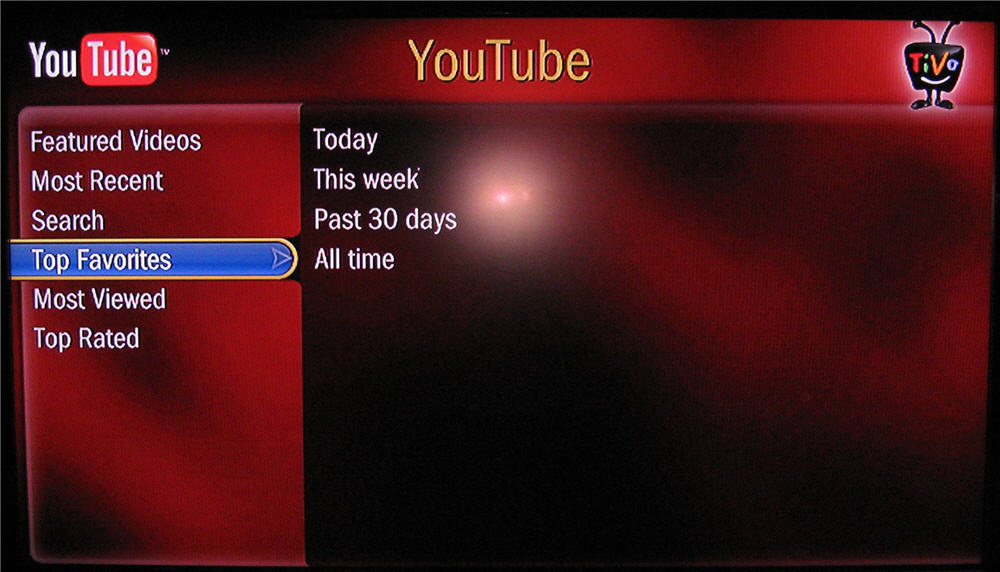 “Featured” and “Most Recent” immediately display a list of videos, but “Top Favorites,” for example, has a second menu that allows you to narrow it down further.

But I don’t really care about what YouTube is featuring, nor do I care about what other YouTube users like or rate. I go to YouTube to watch what I want to watch — in this case, Bob Dylan — so I need to use the Search.

And this is where some problems start creeping in. 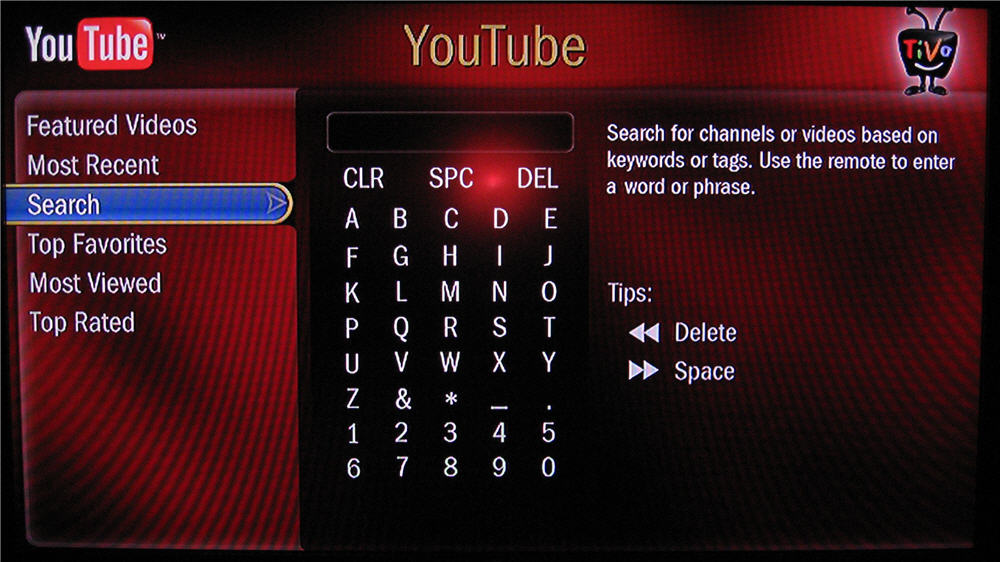 Let’s face it: using the TiVo remote — or any remote — to hunt and peck through a grid of letters and numbers totally sucks. Period. It’s worth it for a special search, but not for any kind of regular use.

To be fair, with every letter I enter, the UI helpfully offers suggestions: 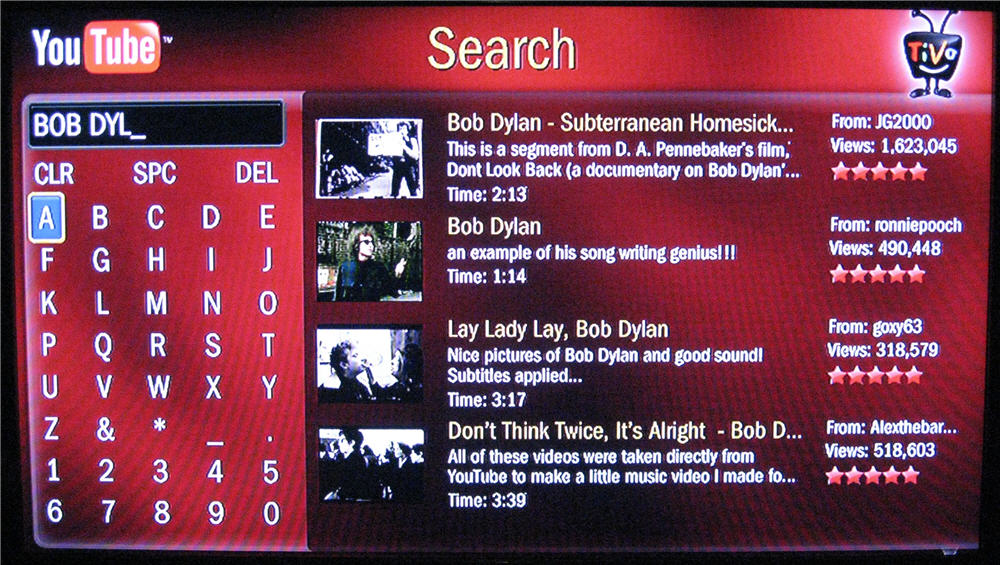 Nevertheless, it’s still a tedious process, and there doesn’t seem to be any rhyme or reason to what the results are. I’m guessing by ratings — how many stars people have rated that video — but who knows for sure? 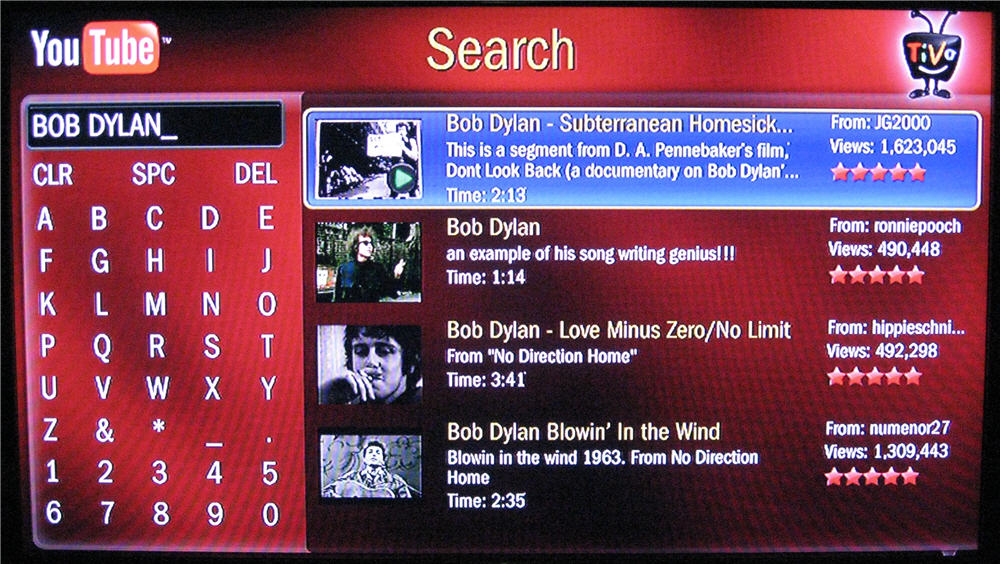 Here’s a suggestion: give me number of results for my search. In addition, give me a way to change how the results are displayed, by letting me choose how they are sorted:

This would be a very powerful feature, and would help users find what they are looking for without having to scroll through pages and pages of results.

Let’s select the first one in the results — the classic “Subterranean Homesick Blues” video: 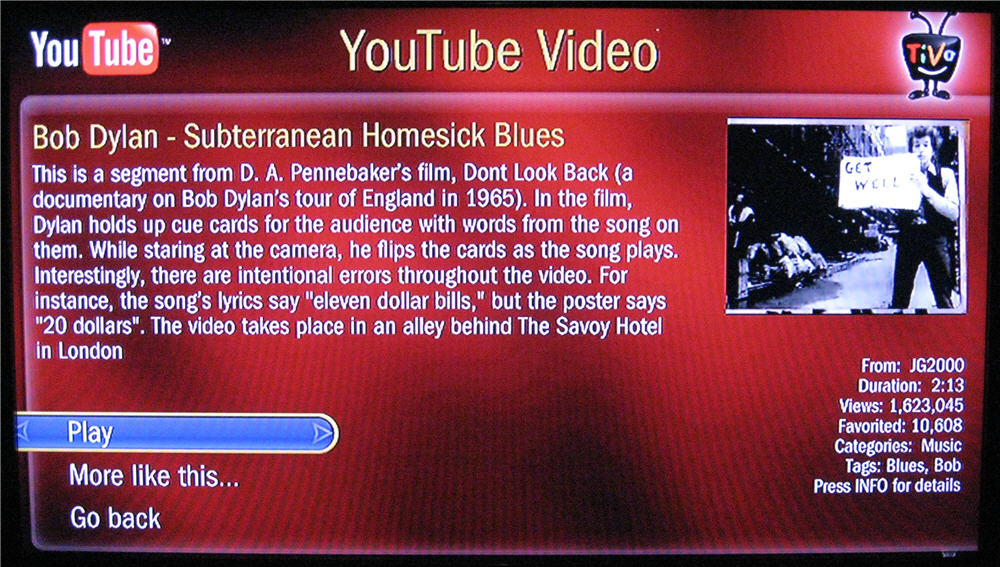 First off, they give me metadata about the video:

All of this information is useful in helping me determine whether or not I actually want to play a given video or go back and look for a different one. In this case, I’m going to play it.

After a “please wait a few seconds” screen, the video plays.

One of the things I like is that if you start a video, stop it and then restart it, TiVo remembers that you’ve already played it and and there is no lag the second time. 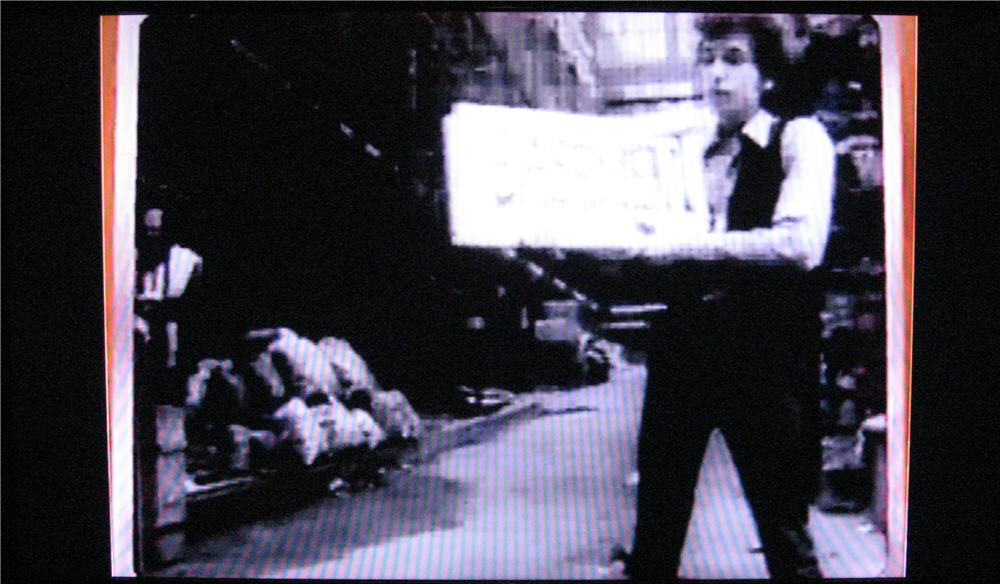 However, when you actually play a video that somebody randomly uploaded, you’re going to have all of the usual issues with picture quality and sound quality. This particular “Subterranean Homesick Blues” lacked, to say the least.

However, I later went back and watched the Black Mountain video listed on the “Featured Videos” page, and since it was uploaded by their record company, it looked and sounded excellent. As always with Web video, you’ll have to consider the source. 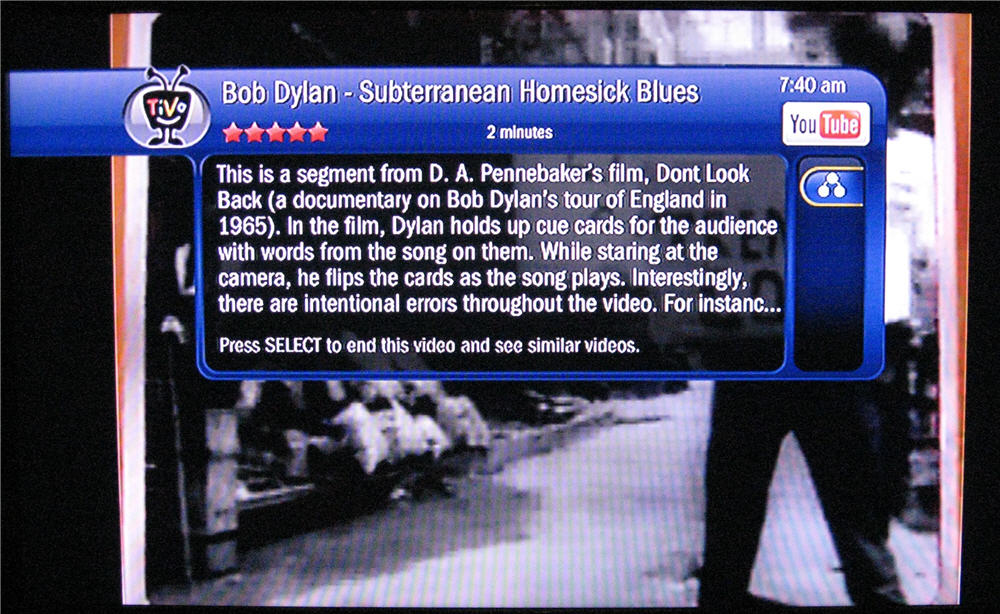 One nice touch is that you can use the “Info” button to bring up the metadata in the middle of the clip.

It also lets you go back to your search results, so I decided to back to find something that is, er, not available for sale anywhere. 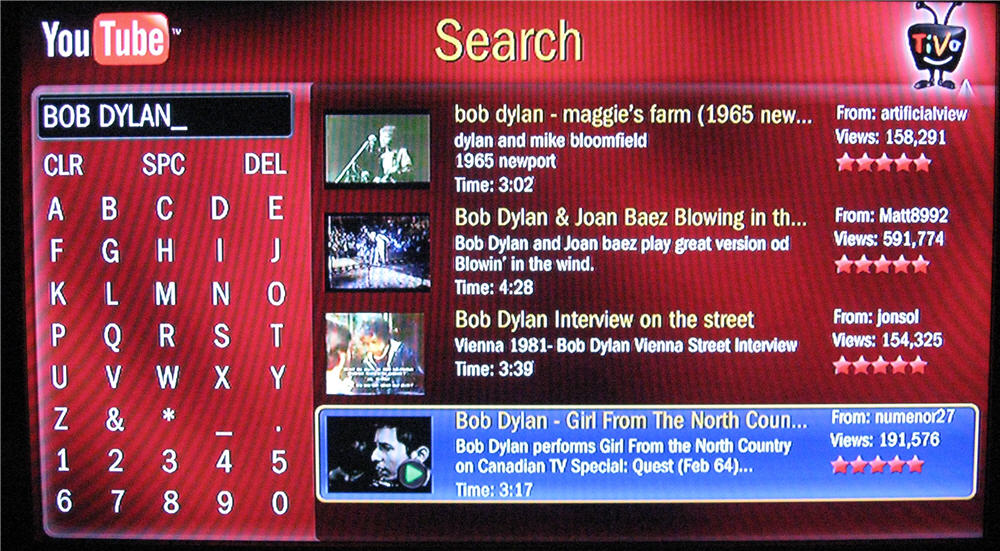 Since I’m not really sure what I’m looking for — maybe that “When The Deal Goes Down” video that featured Scarlett Johansson — I start scrolling through the results. And after about 17 screens — 52 results (I counted) — I hit the end. No more pages to scroll through.

Surely there can’t be only 52 Bob Dylan videos on the whole of YouTube?

This is a flaw, because I know that there are far more Dylan videos out there, but it’s not intuitively clear how I can find them. 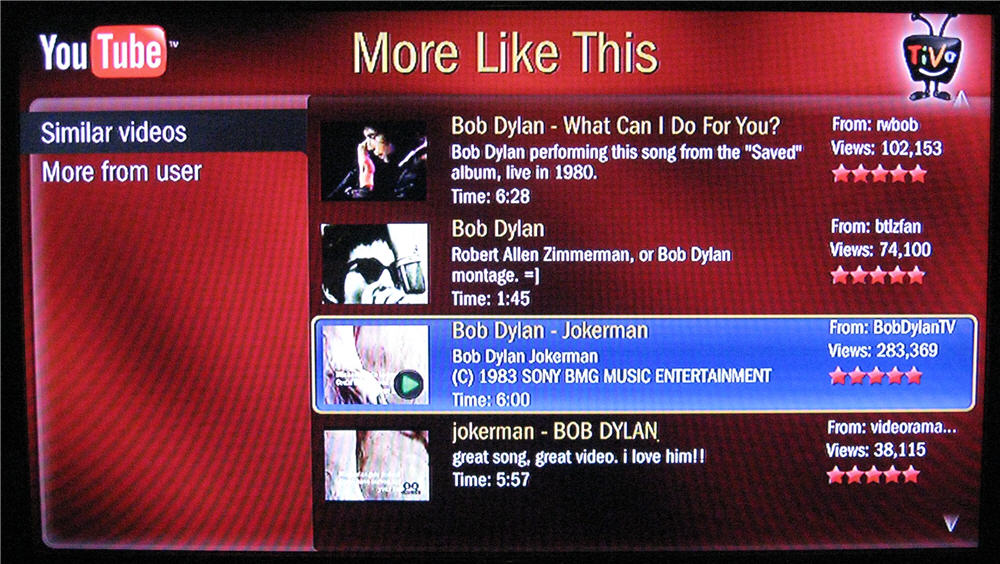 After some more clicking around, I figured out that the key to unlocking more videos is the “More like this” choice you see on the screen that shows the metadata of a selected video.

The problem with this is that while it does give you a chance to focus the search some more by subject and by uploader, it’s not very useful as a method of extending your search results. What if you got to that last screen on your original search and never actually selected a video? You’d just assume that there were no more videos on your subject and give up.

Look! It’s “Jokerman,” which has been on the short list for my all-time favorite video since we taped it from Night Flight over 20 years ago. Even better, since there is a Sony copyright and the uploader is BobDylanTV, it should be of the highest quality in terms of both sound and picture!

Can’t wait to play this one! 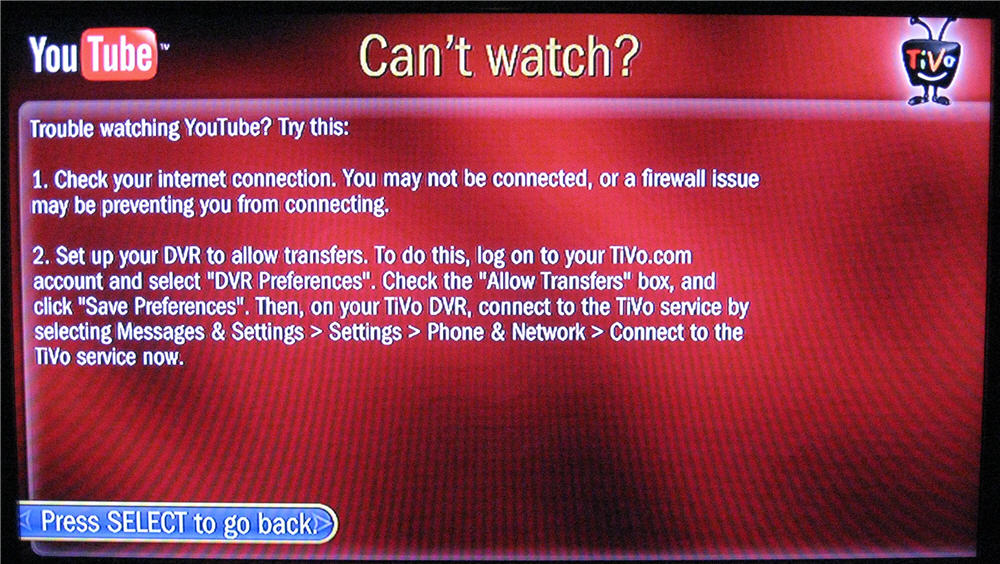 Except that I couldn’t, because instead of the “Jokerman” video, I got an error message that told me that I didn’t even have my TiVo set up to get Web videos in the first place. Which, of course, is dead wrong, since I’ve been watching them for months and months now. Not to mention just a couple of seconds prior, and a few seconds later, to boot. 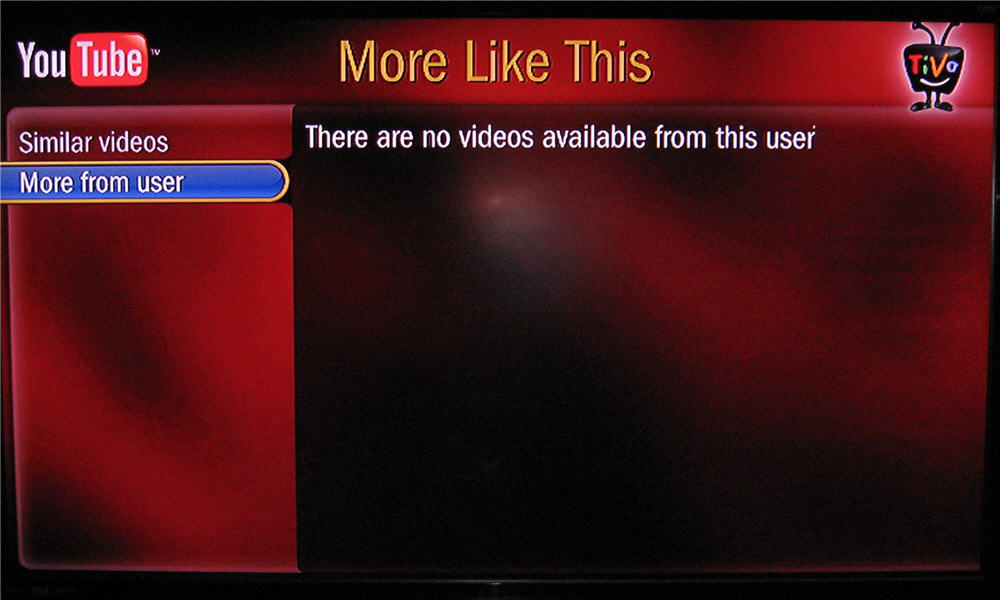 After I made sure that I could play other videos, I went back to the “Jokerman” video and got the same error message, so I went to the “More From This User” menu item, which told me that there are no videos available at all from BobDylanTV, despite the fact that I’d just seen one in the search results.

Oh, and not only are there loads of BobDylanTV videos on YouTube, BobDylanTV is also an official Partner of YouTube. I can play the “Jokerman” video from the Web to my heart’s content. Which, of course, isn’t the point here.

While this might seem like a bit of a “gotcha!” moment, I don’t think that there is anything more going on here than YouTube probably not having the right to allow me to play the BobDylanTV videos on my TiVo — ironic, considering all of the bootleg performance videos I can watch to my heart’s content. However, I should never have received that misleading error message which made it seem like it’s my fault. That’s bad. Even worse is the fact that I ever saw that video as available in the first place.

However, I’ll assume that it’s a left hand not talking to the right hand issue and it will be taken care of in time. Either all of the rights clearances will be resolved, or those videos won’t be displayed as search results.

In the scheme of things, I think that it’s a small problem, especially when compared to the biggest problem facing YouTube on TiVo: a easy-to-use search UI. The TiVo interface is the greatest ever for DVR purposes, but it doesn’t have a keyboard, so that kills it for search. Hey, how about an iPhone-based remote? I could use it to type in search queries.

Obviously, the key is to be able to tie my YouTube account into my TiVo account, so that I can select videos online, and have them show up on a list as available to watch on my TiVo. In real (or realish) time. And, indeed, according to a TiVo press release, this seems to be in the works.

A couple of other suggestions:

Add those features to the TiVo side along with the more interactive display of search results I described above, sprinkle in real-time access to my YouTube account, and it becomes something pretty amazing.

Right now, it’s just cool that exists, but I’m hoping that this is only the beginning of something that ends up far more powerful and useful. Making TiVo closer to the One Box than anything else.

Next up, please: Hulu on TiVo. And in a perfect world: iTunes.