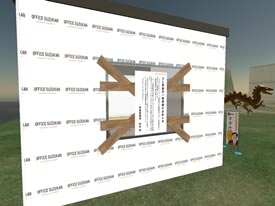 I always think of Japan as a technological utopia — a world populated by super-cool robots and ultra-high-tech gadgets. Over 85 million Japanese citizens are on the net, and Japan’s mobile phones make the iPhone look like a cheap toy.

Given that Japan has one of the most wired populations in the world, you would expect that its politicians would be using the latest technology to connect with voters. But that isn’t the case. It’s against the law for Japanese politicians to use the Internet to campaign for office.

Japanese election laws prevent candidates from updating their websites during the election season. This year the moratorium went into effect on July 12th. Candidates are not allowed to update their websites again until after the July 29th election. And it’s not just the candidate’s websites that are regulated — politicians can’t use third-party social websites either.

What does this all mean? It means that Ichiro Ozawa won’t be responding to your MySpace friend request any time soon. And Yutaka Kobayashi won’t be tweeting. And Kan Suzuki won’t appear at his campaign headquarters in Second Life. As a result, Suzuki has temporarily closed his Second Life headquarters until after the election.

Japan’s election laws control more than just the Internet. The 1950s-era laws also govern how much-printed material may be distributed and in what format. For example, Suzuki recently complained to the BBC that he was limited to printing leaflets for only 3% of the voters in his district. Hardly enough to educate the voters in his prefecture about his stance on the issues.

What sort of campaigning is allowed during the election season? Mostly public events, televised debates, standing outside train stations shaking hands. Also, the ever-popular “campaign-mobile.” Campaign-mobiles work something like this: a late model sedan rolls through residential neighborhoods with a voice blaring from the PA system mounted on the roof, “People of the Kanagawa Prefecture, please consider voting for Yataka Kobayashi. Thank you.” That’s as high-tech as it gets during campaign season in Japan.

It makes me wonder whether Suzuki might have been premature in shutting down his Second Life campaign. What if a virtual Kan Suzuki campaign-mobile drove around the grid making announcements over a virtual PA system? Are simulations of acceptable real-life campaign efforts legal? If Japan were a more litigious society, we might find out. Something tells me that no candidate wants to be the test case.

There are many opinions on why these laws are still in place and what to do about them. On the one hand, young people — hopped up on technology as they are these days — want more information about the candidates and issues. It seems logical that the Internet might be a good way to distribute campaign information. On the other hand, there are some young people who feel the Internet is too informal for something as important as an election. And besides, important decisions should be left to older people!

One Japanese university student commented to the BBC that “Internet resources are not very official” and noted that “if the government or any politicians are on the web, it doesn’t feel right.”

Second Life blogger Rik Riel has an interesting take on all of this. He theorizes that “…the emphasis in Japanese culture on communitarian values and social propriety might mean that using less mediated, less formal spaces for political debate might challenge or break various norms about how authorities communicate to their lessers and the reverse.”

While these regulations may have something to do with the natural respect for authority ingrained in Japanese culture, there is a rising sense of suspicion that the laws are maintained by older, less net-savvy politicians afraid of losing to younger politicians who understand all of this “complicated technology.”

Yutaka Kobayashi, head of the Liberal Democratic Party, has introduced a bill to repeal the net campaign restrictions on four separate occasions. Each attempt was defeated. Kobayashi recently complained that “the election law currently does not reflect young people’s lifestyles.” No kidding.

Regardless of the rising dissatisfaction with these laws, they are still in place, and Japan is undoubtedly a country that obeys the law. So don’t expect Kan Suzuki to update his website or his Second Life presence any time soon. At least not until after July 29th.