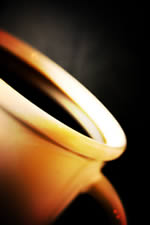 Is there a beverage that has had more influence on society than coffee? Well, maybe beer — but there’s a reason why people don’t describe themselves as Beer Achievers.

Coffee is the ultimate performance enhancing drug. Without a fully caffeinated work force the wheels of capitalism would fall off. Without coffee we would have no software — at least no good software. We probably wouldn’t even have the Internets.

One thing’s for sure, without coffee there would be no Internet coffee shops.

I came to coffee relatively late in life. I blame my grandparents who were both Sanka drinkers. Instant coffee just won’t do. And decafe is out of the question. What’s the point? You might as well drink non-alcoholic beer.

I started guzzling coffee on a regular basis shortly after starting my first job out of college. The job paid peanuts and the hours were long, but the coffee was free. Eventually I dumped the job, but I kept the coffee habit.

Some days I drink eight cups of coffee. Maybe more, who knows. Why count? When I’ve had that much coffee I’m too busy doing other things.

Someone once suggested that I might want to cut back on my coffee consumption. I think he was a doctor or something. Obviously a quack. As everyone knows, coffee is actually good for you. Recent studies indicate that coffee lowers the risk of diabetes, Parkinson’s disease, and colon cancer. Who wants colon cancer? Not me, I’ll drink more coffee instead.

I have no clue who Sir James Mackintosh was, but clearly the man knew his coffee.

I could go on about my addiction to coffee, but it’s time to brew another pot. Instead I’ll leave you with this classic commercial from the 80’s. It’s hard to imagine there was ever a time when the National Coffee Association had to promote coffee drinking.