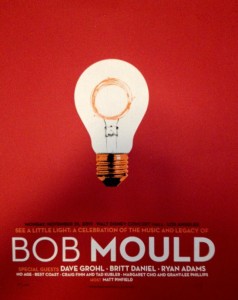 Fast-forward to last night, a snappy quarter-century later, and there were now enough people like me that someone organized a Bob Mould tribute concert at the Disney Concert Hall in L.A. to which we would drag our tolerant spouses and bemused teenage kids while we thought deeply about those times when seeing live music wasn’t a huge production, but just how we lived our lives.

But still, a Bob Mould tribute concert? It seemed kinda weird: no doubt that the sound he created — that sustained supersonic roar upon which was laced sing-along songs with super-smart words — became the template for dozens, hundreds, thousands, millions of bands (many of whom became household names), but pop-punk is now such a generic form, it’s hard to think that it had an actual creator.

(And yeah, Ramones, Buzzcocks, blah blah blah, I know, but neither band was as powerful nor as pretty.)

But it’s been a weird year for Bob Mould. His autobiography has had actual legs, being both well-written and well-timed, and after a year of discussing his past, the concert seemed like a fitting culmination. All any of us who loved his music could hope for was some cool people doing interesting interpretations of his songs, and a healthy dose of the man himself.

And, for the most part, the concert delivered. Last-minute addition Britt Daniel came out and — backed by Bob’s rhythm section, bassist Jason Narducy and the renaissance man, drummer Jon Wurster, both of whom backed nearly all of the performers — tore into Copper Blue‘s “The Act We Act,” it was obvious that the concert was going to be by fans and for fans.

The fan service aspect of the concert was pretty much formalized by two facts: nearly half of Copper Blue was performed, and noone did a song from any his post-Sugar solo albums, not even “Egooverride.” The former is fine: Copper Blue is one of the greatest “trying-to-be-as-commercial-as-is-humanly-possible” albums in existence, but I have mixed emotions about the latter.

There is no doubt that Mould’s post-Sugar albums have gotten lost in the fray, as younger bands took his sound and ran with it, but at the same time there are some great songs on every single one of those records, and that includes the controversial Modulate. So those records are part of the canon, and were conspicuous by their absence.

That said, Bob’s lifetime pass isn’t because of those records, either, and this really was about giving us what we wanted: the amazing, ground-breaking music he made in his (and our) 20s & early 30s.

So while there was great applause when Bob told us he was going to go into the studio in January and record an album of shorter songs with Wurster & Narducy, we were there to see “Makes No Sense at All” and “Celebrated Summer” and to cheer on as Craig Finn and Tad Kubler of The Hold Steady segued from “A Good Idea” into “Changes” because those songs were born to follow each other and because of course the guys from The Hold Steady would know that.

Less successful was Margaret Cho — who is obviously a huge fan like the rest of us, and sang from her heart just like the rest of us would — and the mercurial Ryan Adams, who chose songs from Bob’s first two solo albums to do on acoustic guitar, but maybe not the best songs from those records.

Adams himself was as mesmerizing as he could be, but I would have rather had him do songs I liked more from those records, that’s all.

But — apart from the sound at the Disney, which swallowed guitar solos whole (at least from my nosebleedy seat in the balcony) — those were pretty much the only cavils I had with the entire night, and they both get props for balls. In fact, I came out respecting Margaret Cho more than I ever had, and I’ll always love Ryan.

But of course, the best part was at the end, when Bob came out, and brought with him perhaps the guy who has benefited the most from following the path that Bob blazed: Dave Grohl. While being awkwardly interviewed onstage by Matt Pinfield (who always gives the impression that he just thought of what to say after he’s already said it), Grohl acknowledged that debt as he strapped on his guitar to back Bob in a Hüsker Dü-oriented that turned out to be the highlight of the evening, and which kicked in with “Hardly Getting Over It.”

“Hardly Getting Over It.” From Hüsker Dü’s first WB album, Candy Apple Grey, it’s six minutes of acoustic guitar and synth, and I supposed could have been (and maybe was, in Albinistan) interpreted as the epitome of a major-label sellout tune. Except, except, except for this: it’s deep, dark and harrowing, sounded like nothing else they’d had ever done, and so obviously from the heart, it made complete sense the was it was. (And paired with the the all-acoustic “Too Far Down” in the dead center of the album, helped to ground Candy Apple Grey in a pit of despair guaranteed to make a major label A&R guy tear his hair out.)

Last night, “Hardly Getting Over It” was slowed to a crawl in the verses, but utterly exploded at the end, as if to suggest that Bob had — at the very least — mostly gotten over it, that the maturity and reflection that comes with middle age had served him well.

But maturity doesn’t mean mellowness, you fucking young whippersnappers, so that was followed by an absolutely blistering “Ice Cold Ice,” and eventually culminated with one of the coolest things I’ve ever seen: Dave Grohl stepping back behind the skins to pound out “New Day Rising” like he was Grant Hart on speed.

New Day Rising was the follow up to Zen Arcade , and released so hard on the heels of that landmark, we’d barely had time to process it. I remember that there was a promo 7″ we had at KFSR that came out just a couple of weeks before the album with “Celebrated Summer” on one side and “New Day Rising” on the other. Had it been an actual single, it woulda been the punk rock version of The Beatles following Sgt Pepper’s Lonely Hearts Club Band with the “Penny Lane / Strawberry Fields Forever” single.

But this? Playing “New Day Rising” with Bob Mould? This is something that Grohl has obviously wanted to do since he first heard the fucking thing back in 1985. I’m pretty sure that the only thing left on his to-do list now is playing “When The Levee Breaks” with Jimmy Page, Robert Plant and John Paul Jones. Just amazing.

Naturally, I’ve only scratched the surface. The evening was full of great Mould songs: “I Apologize,” “Something I Learned Today,” “If I Can’t Change Your Mind,” “Could You Be The One,” “Chartered Trips,” and at the end, the inevitable singalong to “See A Little Light,” with many of the people who had already been onstage.

And, of course, Bob made a heartfelt speech thanking everybody, which was nice, but not completely necessary.

Like I said, he has a lifetime pass, and just being able to celebrate the reasons he has that pass are good enough for me.