Bravo, Bravo! You have finally done it! You have taken one of the best websites ever to grace the internet, and in just a little over space of a year, you have turned it into a garishly unusable pile of synergy-laden shit.

When you took over TWOP last year, I said I wasn’t worried. Well, you showed me. Turns out, I’m a fracking idiot. Who knew that when I professed my love for this site after it had been one of my top destinations for years that it would all end so . . . badly. Well, I guess you did, huh, Bravo?

Of course, this has been long in the process: last night, as I was ranting about this to Roxanne, she said that she’d stopped reading it at around the same time Bravo bought it, implying that I was a fool to expect anything else. And she calls me the cynical one!!

Normally, yes, but for some reason, I held my cynicism — probably because as long as it was obvious that the site was still mostly about the writing that made it originally so attractive, I was going to let my heart override my head. So I ignored all of the apocalypse signs that had been accumulating: the blogs with their Hulu links, the pointless photo galleries, the even more pointless video log which seems to be about someone who has never watched TV shows commenting on them.

No more: the latest redesign has made it plain that Bravo doesn’t give a rats ass about what once made TWOP so great.

I’m not against redesigns, but I am against pointless, craptastic redesigns. And this is extra special craptastic. I offer a bit of a compare and contrast. First, thanks to the magic of the Internet Archive’s Wayback Machine, here’s a screengrab from just a couple of years ago, when it was in its heyday. 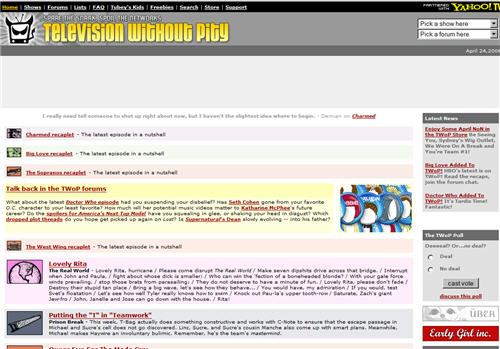 Now, here’s a screengrab from the redesign they put up in just the last week. 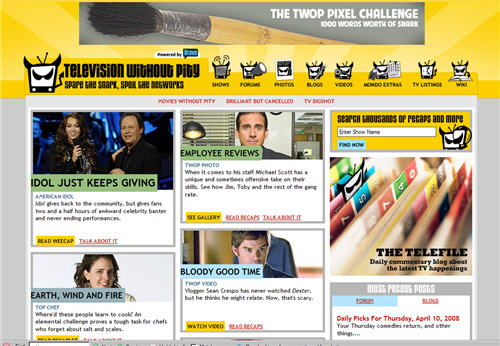 You tell me that this is a website that has any understanding of what its mission is supposed to be. Or if it even has a mission anymore.

They retain the “Spare the Snark, Spoil The Networks” tagline and the Tubey mascot, but instead of a simple, reverse chronological list of the most recent recaps (and drop-downs to get you to the individual show pages), and the elegant line drawings that went with them, you’re now assaulted by a blocky unfocused website that wants to be all things to all people — Photos! Blogs! Videos! TV Listings!!

Oh, and that “search thousands of recaps and more”?? Not so much with returning any results. Unless “Buffy” is a term that they don’t have in their database. No doubt that will be fixed eventually, but I’m getting in my cheap shots where I can.

Speaking of Buffy, what about the secret greatest strength of TWOP, its long tail? You know, a decade’s worth of recaps of TV shows, perfect for reading as you’re working your way through those Buffy box sets?

Good luck with that: you used to be able to sort the recap listings by season, but not now. Here’s an actual screen grab from the full recaps page for Buffy The Vampire Slayer: 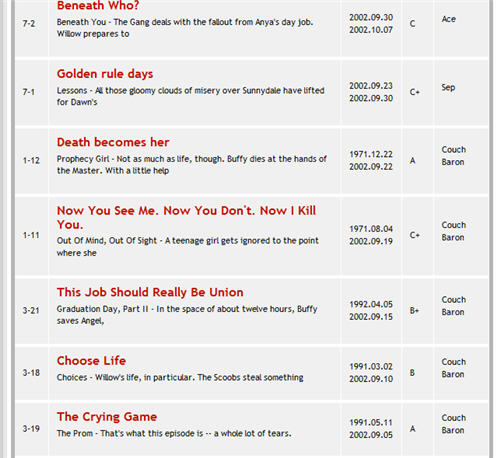 Where to begin? I mean, forget the fact that the grades are different from what I remember them to be, or that the titles of the episodes aren’t highlighted, or even the fact that — according to the this page — the first season of Buffy was in 1971. Nope, what I am going to concentrate on is the obvious decision to post these not in the order that the episodes actually aired, but rather when the recaps were written.

You see, they didn’t start recapping Buffy until the middle of the show’s run, but knowing that there would be a demand, they went back and recapped all of the early seasons. There are a bunch of shows like this: Battlestar Galactica, Mad Men and The Wire are all shows where the recapping started at some point into the shows run.

It’s a simple thing, but it reveals volumes about how Bravo thinks about what used to be the bread and butter of this site.

And with that thinking, they’ve reduced Television Without Pity from a site that had a definite, unique point of view about TV — and TV’s place in the pop culture universe — to a site that is just like any other entertainment site.

Nowhere is this more obvious than in the very prominent link to Movies Without Pity, created because someone at Bravo was no doubt aghast that this site was slumming with just Television stuff and wanted to class up the joint a bit.

But “Movies Without Pity” is just a page with absolutely no personality whatosever — it’s no different from any of the other zillions of other pages about films out there.

The new slogan: “Suck Up to The Studios, and Maybe We’ll Get Ad Revenue!”

Sigh. Can you tell that I’m a bit pissed? Thank gods that there are a lot of other sites now that do the TV recap thing well: What’s Alan Watching? and The A.V. Club’s TV Club, to name just a couple, because I have a feeling that TWOP has essentially just released their Around The Sun. And as long as Bravo owns them, I doubt that they have an Accelerate in their future.

“Powered by Bravo,” it says, between the banner ad at the top of the page, but below the actual name of the website. Overpowered by Bravo is more like it.

And sent straight into a hell dimension, where all personality is stripped bare.

I once wrote that if I could have any job on the internet, it would be writer for Television Without Pity. I take that back.