I want a new job. I want to go work for the Parents Television Council, and spend my time watching and cataloging sex & violence on prime-time television. This is what they do. They watch TV, looking for sex and violence, and when they find it, they tell the world. It’s awesome.

They’ve just released a study with this alarming headline:

END_OF_DOCUMENT_TOKEN_TO_BE_REPLACED

ABC, which was hit a couple of weeks ago with a $1.4 million fine by the FCC, has decided to fight back.

The fine was imposed because of a scene in a 2003 episode of NYPD Blue that showed a woman’s buttocks and a bit of what the Celeb gossip sites all call “side boob.”

Just like NYPD Blue had been doing for 10 years. This time, however, it was different. I guess. And five years after the actual episode was broadcast — three years after NYPD Blue went off the air — the FCC came down with their oh-so-timely fine.

And the children, once again, are saved from the gruesome horrors of the naked female human body! Thank God. Or thank Wholly His Official Representatives on Earth, the children-loving, naked-woman hating Parents Television Council, who, as usual, decided to be offended so that the rest of us didn’t have to.

END_OF_DOCUMENT_TOKEN_TO_BE_REPLACED

I don’t really have anything coherent to write about, so instead, here are a few random thoughts that I was too lazy to make into full posts.

The FCC Gets Its Ass Handed To It

It’s big big news that the FCC got smacked down by a Federal Appeals court for their kowtowing to groups like the PTC and slapping fines on every broadcaster who had somebody let loose a stray “fuck” on their airwaves.

END_OF_DOCUMENT_TOKEN_TO_BE_REPLACED 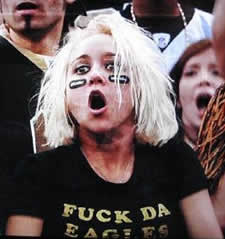 There’s something about post-season football that inevitably leads to the discussion of indecency on television. After the lengthy national debate over Janet Jackson’s breast you would think that we would have settled this issue by now. Instead, we’re gearing up for a new battle over another kind of wardrobe controversy.

The latest indication that pro football is unraveling the moral fiber of our society came during Fox’s broadcast of the Eagles-Saints game on Saturday. The network briefly showed a Saints fan wearing a t-shirt that clearly read “Fuck Da Eagles”.

You would think that The Parents Television Council, James Dobson’s Focus on Family, and a few dozen other groups of conservative religious activists would be making an issue of this incident. Well they aren’t. At least not yet.

END_OF_DOCUMENT_TOKEN_TO_BE_REPLACED

In a bit of good news for censorship foes, a Federal judge in Denver has ruled that retailers who were “sanitizing” films by removing all of the good parts prior to selling them to a probably-witting niche were also violating copyright laws.

This case has been in motion since 2002, when CleanFlicks tried to twist the First Amendment by claiming that they had the right to do whatever they wanted to these films prior to sending them out to the public. The judge, however, saw right through that bullshit: