I am not normally associated with the tin-foil hat crowd but something has been cropping up with regularity in the news that has been keeping me up all night lately, which then makes me tardy with all sorts of assignments. I am talking about “Peak Oil,” the doomsday scenario that nearly everyone seems to agree we are rapidly approaching or may even be in the throes of already.

END_OF_DOCUMENT_TOKEN_TO_BE_REPLACED

The RIAA has finally won its long running battle to have the Russian music download site AllOfMP3 shut down. The announcement came earlier this week, curiously timed to coincide with Vladimir Putin’s visit with George Bush. Coincidence? Hardly, it’s been widely speculated that the existence of sites like AllOfMP3 were a huge roadblock to Russia’s entry into the World Trade Organization.

Almost immediately after the shutdown, a new site called MP3Sparks was launched by MediaServices, AllOfMP3’s parent company. MP3Sparks offers an almost identical selection of music, pricing structure, and encoding options. The new site even supports accounts created on AllOfMp3. Or at least it did while it was online. MP3Sparks is now offline as well, and it’s unclear whether Russian authorities caught on quickly, or if the site might actually be the victim of its own success.

In another coincidence of timing, we’ve been hearing quite a bit about Universal Music Group’s efforts to play hardball with Apple. Universal is apparently refusing to resign a long term agreement to make its catalog of music available on iTunes. Instead, they’ll be negotiating on a month-to-month basis and will have the ability to pull their entire catalog from iTunes on short notice.

END_OF_DOCUMENT_TOKEN_TO_BE_REPLACED

I admit to being a bit old-fashioned, but in my mind, good customer service rarely involves suing your customers. But, for the past several years, that’s just what the RIAA has done. Nothing creates a warm and fuzzy feeling about an industry faster than threats. Makes you feel wanted.

Illegal downloads are a problem. I maintain — because frankly, the RIAA has offered nothing in the way of hard evidence — that the amount of money being lost is quite a bit less than what the press releases suggest. I believe this simply because every download does not represent a lost sale. In many cases, the songs would have gone unsold, unheard, unnoticed.
END_OF_DOCUMENT_TOKEN_TO_BE_REPLACED

END_OF_DOCUMENT_TOKEN_TO_BE_REPLACED

Following up on Kirk’s article yesterday on bootlegs, I thought it might be a nice waste of bandwidth if I threw together a list of music that I would purchase instantly if it were only legitimately released. Some of this is music that I have listened to zillions of times, in every format imaginable, as bootlegs were taped or ripped for me over the years. Or purchased on vinyl from long-gone record stores in San Luis Obispo and Westwood. Or maybe they were cassettes I found found at the Camden Town Street Fair; or CDs I came across at the KUSF record swap.

Some of them, of course, came via Napster or other like-minded sites. Hell, a couple I even recorded from the A couple I originally recorded from the King Biscuit Flower Hour. All of them have two things in common: either the record company or the artist thinks that these have no audience and/or artistic merit, and I would buy them in a split-second if they were ever actually legitimately released.

END_OF_DOCUMENT_TOKEN_TO_BE_REPLACED 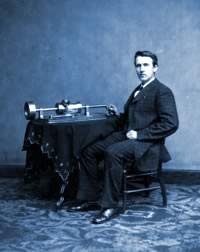 It’s not widely known, but the first bootleg recording was made by Thomas Edison back in 1902. Edison snuck one of his wax cylinder recorders into a parade where he briefly recorded John Philip Sousa’s band as they passed by. Edison was a huge fan of Sousa and was eager to use his invention to relive the performance in the comfort of his own home. Sousa, on the other hand, hated Edison’s invention and refused to be recorded. Edison knew that his clandestine recording was the only hope he had of ever enjoying Sousa’s music privately. Music fans have been recording and trading live performances of their favorite artists ever since.

Edison’s recording is what we commonly call a bootleg. Bootlegs have been a rite of passage for music lovers throughout the rock era. You discover a band, become obsessed with their music, buy everything you can get your hands on, then move on to unreleased live recordings.

END_OF_DOCUMENT_TOKEN_TO_BE_REPLACED

Several months ago, I put together a list of TV shows I’d like to see on DVD. Since we are talking about piracy this week, and using DVDs as an example, I thought it would be interesting to:

END_OF_DOCUMENT_TOKEN_TO_BE_REPLACED

Now that we’ve established that physical media piracy is still a very real problem, the next question that comes to mind is, ‘who buys this stuff, and why?’.

For sake of convenience I’ll use pirated DVD’s in the examples that follow. This shouldn’t be taken as an indication that the problem of piracy is limited to the motion picture industry. On the contrary, piracy is a problem for the music industry, the publishing industry, the apparel industry, and just about any other industry that manufactures goods that can be easily replicated.

Whenever we talk about piracy the discussion tends to revolve around the issue of illegal downloads. It’s strange because a much older form of media piracy is still rampant. Counterfeit media products cost the entertainment industry tens of billions of dollars per year and arguably do more damage to the industry than file sharing ever will.

Consider this: When your 16-year-old brother downloads a song or movie from BitTorrent he may or may not consume the product. It’s open to debate whether or not tangible economic damage has resulted from the download. Certainly a copyright has been violated, but it’s difficult to place a value on the damage that has actually been inflicted. In most cases an illegal download does not equate to a lost sale. By contrast, when a consumer buys a counterfeit CD or DVD it’s much easier to assume that a sale has been lost and some real economic damage has resulted from that sale.

END_OF_DOCUMENT_TOKEN_TO_BE_REPLACED

Last week, we posted an item about the acetate of the first version of The Velvet Underground & Nico going on auction on eBay. (As I write this, the bidding is up to US $107,000.) This weekend, I got an email from a friend who said that he was downloading a digital copy of this album.