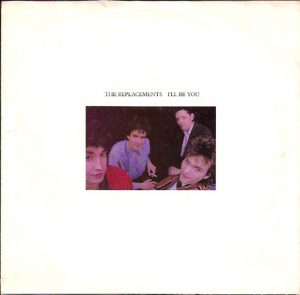 Lonely, I guess that’s where I’m from
If I was from Canada
Then I’d best be called lonesome

I’m sure it’s different now, but for a lot of kids in the 1980s, “I’ll Be You” was possibly the first song they ever heard by the Replacements, and that opening triplet was a fantastic introduction to the lyrical prowess of Paul Westerberg, as well as his way with both a vocal and a hook. Which was needed on a song like “I’ll Be You” which somehow both did and didn’t have a real chorus.

One of the great touches of “I’ll Be You” is the call-and-response that comes out of nowhere again and again, as it kinda orients you in a song that is proud to wander around a little bit, especially as it progresses. The other great touch is Chris Mars’ quick doubling up on his snare after the first line of each chorus.

Well, I laughed half the way to Tokyo
I dreamt I was Surfer Joe
And what that means, I don’t know

A lot has been made of Tom Petty stealing “a rebel without a clue,” and I just think it’s such a great line that it’s such a witty turn of phrase I’m actually surprised more people didn’t steal it. In any event. it’s around here that “I’ll Be You” starts really getting weird around the edges, like it’s not quite sure what it is, starting off with a double chorus in the middle while Slim’s sitar-like lead guitar starts leaking in.

And if it’s just a game
Then we’ll hold hands just the same
So what? (so what?)
We’re bleeding but we ain’t cut

And I could purge my soul perhaps
For the imminent collapse
Oh yeah, (oh yeah)
I’ll tell you what we could do
You be me for a while and I’ll be you
Oh yeah

After that, I’ll be you really starts getting nutty, with the lead guitar whipsawing in and out of the mix, and literally screeching in the background after the modulation as Paul sings with extra passion.

A dream too tired to come true
Left a rebel without a clue
Won’t you tell me what I should do?

I love the way he nearly loses the control he was previously displaying on every single line, just nailing “dream” and “clue” like knows his dream is never gonna happen and his clue is never gonna get gotten, and that’s topped by the chorus which follows.

Oh, if it’s just a lull
Why am I bored right outta my skullllllllllllllll?
Oh yeah, (oh yeah)
Keep me from feeling so dull

It’s impossible not not sit up and grin at both the gang vocals on “bored right outta my” and the long extension “skulllllllllll” which segues nicely into the following “oh yeah.” It’s full of fun, and it’s full of life and being that excited about being that bored is a quintessential ‘Mats move.

After that, one last extended chorus, Tommy’s backing vocals — he sings a lot on these songs — right there.

And I’ll be you
Hey!

Because they made the first real video of their career for a song that was also legitimately great, “I’ll Be You” was the closet thing The Replacements ever had to a hit, topping Billboard’s Modern Rock chart as well as mainstream airplay chart. Hell, it even made it to #51 on the singles chart, the first and last time that would happen, though the rest of their singles got decent Modern Rock play.

But even then, it felt like too little, too late. The Replacements had just recorded too many tremendous songs that went virtually unheard for “I’ll Be You” to feel like anything more than anomaly, a glitch in the matrix. Maybe part of that was due to the fact that Don’t Tell A Soul was an album I tried very very very hard to love as much as the previous three, but just could never fully grasp the plot.