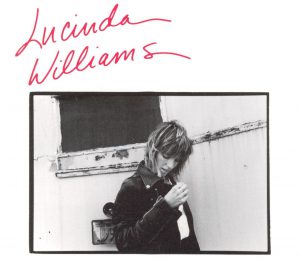 Prior to 1988’s Lucinda Williams, she had two previous albums, 1979’s all covers Rambling and 1980’s Happy Woman Blues, neither of which I’ve ever heard, though I’m guessing that some of you probably have and will tell me that I’m missing some great stuff.

In any event, Lucinda Williams came equipped with a whole reinvention story and a completely unique-feeling mix of rock, blues, folk and country, all of which was sung by Williams in a tough, feral voice.

My favorite was the slow-burning “Changed The Locks,” where, anchored by a bluesy harmonica and Gurf Morlix’s aching guitar, Lucinda explains all of the things gonna do to get a way from a man she thinks has a bit too much power over her.

The think I love about “Changed The Locks” is the escalation of the things she’s going to do to keep herself away from this dude. It starts with changing the locks, of course, but almost instantly, she’s changing her phone number, too.

After that, as the harp wails and the guitar screams, it just gets crazy, and near the end, she lists all of the things she’s done to keep herself away from him.

At no point does she seem like a victim here, which is the key that unlocks “Changed The Locks.” Rather, she seems like somebody needs to keep herself from making the same bad decision yet again, and is willing to go through all sorts of lengths in order to do so.

And even considering those lengths — and don’t worry about how she changed the name of her town, just know that she did — you end up making the assumption that it wasn’t quite enough.