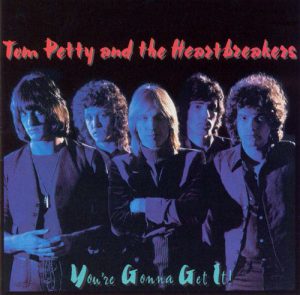 Damn The Torpedoes has always been Tom Petty’s Certified Classic Album (along with Full Moon Fever), and Hard Promises has always been my official Favorite Tom Petty record, but secretly it might just be his second album, the eternally underrated You’re Gonna Get It!.

There was a tweet that flew by me during all of the initial confusion surrounding Petty’s death (and I’m paraphrasing here) that Tom Petty had never gotten his “indie reappraisal” in the same way that contemporaries like Bruce Springsteen or David Bowie had. Well, if it’s ever going to happen, You’re Gonna Get It! is the place to start.

More focused than the debut, it features a slew of songs that were able to create a perfectly holy alliance of The Byrds and The Rolling Stones. And there was just a bit of punk edge in there, attitudinally, if not musically, which was why they were temporarily marketed as “new wave” by Shelter Records’ misguided publicity department

But that full alliance on display right from the opening track of You’re Gonna Get It!, the stellar “When The Time Comes,” which opens with a ringing guitar riff reminiscent of The Byrds “Why” but featuring Petty’s down-and-dirty vocals as he opens with:

At the end of each verse, Petty vocally twists around the last word: “who can sayeeayy” “I don’t miiieeeiiinnd” and every single time it kills me as it perfectly sets up the chorus with a sigh.

“When The Time Comes” is short, simple and sweet, a veritable hook machine, even as it makes room for a bridge and a typically bracing Mike Campbell guitar solo at the fade. It all adds up to an utterly diabolical way to induce me to play my first Tom Petty album over and over and over again.

“When The Time Comes”