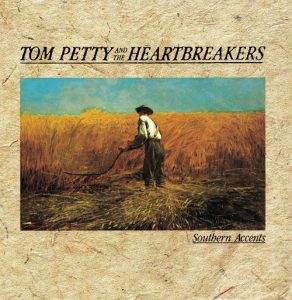 And then there was “Dogs On The Run,” a big old widescreen Springsteen anthem as sung by Petty channelling Bob Dylan and featuring Mike Campbell channeling Roger McGuinn.

Of course, none of that was particularly new for a Tom Petty and The Heartbreakers song, but it stuck out like a sore thumb on Southern Accents; after a half-dozen songs that were trying to expand the idea of what Tom Petty could do, “Dogs on The Run” just blew me away, even if it felt like he was trying a bit too hard.

I fell overboard and washed up on the beach
Yes, let the waves and sand roll over me
I was helped to the home of a young bleached blonde
Who said, “Honey I discovered early in life
There’s ways of getting anything I want”
Some of us are different
It’s just something in our blood
There’s no need for explanations
It’s just dogs on the run

But when the horns — which made “Dogs on The Run” more than just an old-school Petty song —
swell into the end of each verse and Campbell plays his massive hook, it doesn’t even matter.

“Dogs on the Run”