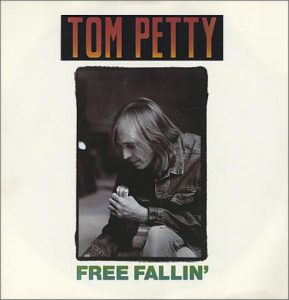 So there’s this angle: the summer of 1989 was absolutely dominated by Full Moon Fever. Going to parties. Blasting out of cars. On the radio. On the MTV. Most certainly on my CD player. Hell, “Free Fallin'” was the third single from that album, and ended up being Petty’s only top ten single, despite the fact that it was already everywhere before it was released as a single.

Or possibly this: Like all of Tom Petty’s greatest songs, “Free Fallin'” is simple as fuck, starting with just a couple of 12-sting guitars ringing like a phone call from heaven, and one of Petty’s most vivid opening verses.


Neither the first nor last song transplanted Floridian Petty would write about his adopted city, “Free Fallin'” moves like a slow, lazy Saturday afternoon that has been shattered into pieces by a good round of daydrinking on the porch.

And of course, there’s this: on that chorus, which is etched into all of our brains, Tom Petty finds infinity. In between his declarations of freedom and his realization that he’s falling, all of time and space is suspended, and it’s that perfect moment, like right before Wile E. Coyote looks down. Don’t look down. Never look down.

All the vampires, walkin’ through the valley
Move west down Ventura Blvd
And all the bad boys are standing in the shadows
And the good girls are home with broken hearts

I supposed I could talk about the production: the love for that verse might just be the extra vocal bump at “Ventura Boulevard,” courtesy of the evil Jeff Lynne.

Right? Even though I’d enjoyed the single he did with George Harrison and loved the Traveling Wilburys album — which I didn’t know at the time was more of a continuation of the partnership Petty & Lynne started on Full Moon Fever than a precursor — I still had trepidation about Jeff Lynne producing Tom Petty. But here’s the thing: compared to Southern Accents and even Let Me Up (I’ve Had Enough), most of Full Moon Fever is relatively straightforward.

Except, of course, for the backing vocals. And that was the thing I had to figure out: having never been that much of a fan of Electric Light Orchestra, could I deal with the multiple overdubbed Jeffs Lynne who were harmonizing with Tom instead of Howie Epstein and Stan Lynch?

It’s a question that you have to deal with pretty soon, too, as Lynne’s right there singing the counterpoint, ruining everything. But not really. It kinda works. Because everything about “Free Fallin'” works; every single note is exactly where it should be.

Yeah I just don’t know: I’ve loved both the simplicity and the complexity of “Free Fallin'” for nearly 30 years, and I’m still not sure I’ve properly explained why.

That video for “Free Fallin'”