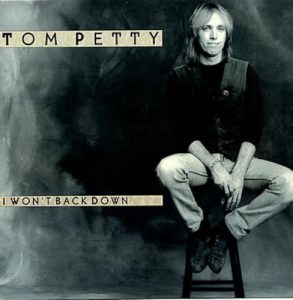 The fifth time I saw Tom Petty and The Heartbreakers was at the Universal Ampitheater in Studio City on January 24, 1990, but they weren’t even the reason I was there.

No, the reason that John, Nikki, Mark & I drove down to L.A. was to see the taping of the eighth anniversary special of Late Night With David Letterman, which was still my favorite pop culture thing in the universe, so seeing Tom Petty and The Heartbreakers as the special musical guest was icing on the cake.

And in fact, they only did one song: “A Face in the Crowd,” which happened to be the sixth single they’d released from Full Moon Fever, and while I’d preferred if the song had been “Running Down a Dream” or “Free Fallin’” or even this one, it was still very important to me that despite having his hugest success as a solo artist, it was still very important to him to perform with The Heartbreakers.

Also important: “Won’t Back Down,” the lead single from Full Moon Fever, which featured a throwback new wave rhythm guitar and drumbeat, dynamite slide guitar from Mike Campbell and perhaps the most unaffected vocal Tom Petty ever produced.

He’s also way up in the mix, as if he didn’t want anybody to miss what he was saying, which was, of course, this:

So “Won’t Back Down” was both personal and universal. And with Jeff Lynne, George Harrison & Howie Epstein providing providing vocal support on the choruses, it was also eminently tuneful, making it all the way to #12 on the Billboard charts, and setting up Full Moon Fever as Petty’s best-selling since Damn The Torpedoes an entire decade previously.

At the time, of course, we all thought that Full Moon Fever was a continuation of the Traveling Wilburys, but it turns it was actually a precursor; much of the record was recorded in Mike Campbell’s garage in about a week a few months before the Wilburys spontaneously formed, but it was rejected by MCA cos the A&R guy said he didn’t hear a single.

So, a year a so later — after the improbable yet inevitable success of Traveling Wilburys — they convinced MCA to put it out, kicking off Tom Petty’s even more improbable second wind.

Sure, he’d been able to hit the top 20 with the lead singles from every record he’d put out since Damn The Torpedoes, but his album sales weren’t all that great — so Full Moon Fever was the first of his second series of albums that were critically and/or commercially acclaimed, and cemented him as the guy that so many of us from multiple generations are still mourning.