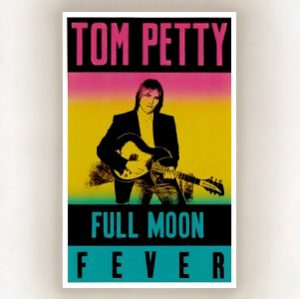 And of course, the defining thing about Mike Campbell was his taste and restraint: he almost never overplayed. Except, of course, for this one glorious time, on the first record since 1976 where he wasn’t part of The Heartbreakers. So I guess he figured he could cut loose.

But, of course, it wasn’t just that. It was also that Angus Young riff he came up with to anchor the song, as well. At first, with Phil Jones playing a straight fast tink-thunk-tink-thunk beat, and Campbell tossing in that riff at just the right time, “Runnin’ Down a Dream” is a spacey driving jam with a reliably catchy chorus.

With fierce acoustic guitar strums sailing in between each line of that chorus, “Runnin’ Down a Dream” achieves a pretty good momentum, but then, when you least expect it — unless you’ve heard it as many times as we all have — Campbell’s guitar solo comes spiraling in over some “oooh ooohs” and you figure it’s a quick solo before back to the chorus.

And at first, that’s what it seems like, but then all of a sudden, pyrotechnics! Like he’s trying to be Eddie Van Halen or some shit, and it goes on and on, notes spiraling around each other like pinwheels, until you can hear the fade kicking in. AND NO, DON’T FADE OUT ON US! KEEEP GOING! THIS SHIT IS AWESOME!

But of course, it fades away like taillights on a dark summer night, and afterwards, you can even be forgiven for wondering why he doesn’t do that more often, until you realize that’s the entire point of Mike Campbell: not to do that more often.

“Runnin’ Down a Dream”