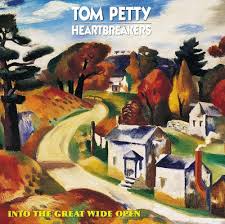 Into The Great Wide Open was probably Tom Petty and The Heartbreakers most stylistically cohesive album since Long After Dark nearly a decade before, and there were a lot of worthy songs: the swampy-rocker “Out in The Cold,” the widescreen cautionary tale “Into The Great Wide Open,” the lovely “All The Wrong Reasons” (or as I’ve always called it, “Re-Falling”) (and yes, I only wrote this paragraph in order to work that joke in) are all worthy entries into the upper middle reaches of Petty’s canon.

But my favorite song on the entire record was the the one songs that didn’t really sound like the rest of the record, the near doo-wop closer “Built to Last.”

With Stan Lynch (or a ringer, I guess) playing a booomy kick drum and a highly echoed snare while Campbell & Petty chinged their guitars on the off-beat to create almost a Drifters-like feel, “Built To Last” dispensed with the plethora of overdubs that dominated Into The Great Wide Open for a more direct sound.

It didn’t really sound like you’d expect a Tom Petty song to sound, but after over an hour of pretty much what you expected Tom Petty circa 1991 to sound, “Built To Last” comes off like an unexpected summer breeze on a hot summer’s day.

With perfectly deployed backing vocals — thanks Howie Epstein — chiming in and out throughout that chorus, an understated solo from Campbell in the middle and good vibes throughout, “Built To Last” ended up being my favorite Tom Petty album closer since “You Can Still Change Your Mind”