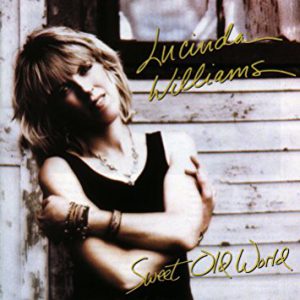 Released four long years after she found her groove with Lucinda Williams, the follow-up Sweet Old World established once and for all that — like, say, Bruce Springsteen — Lucinda Williams was going to release albums when she was damn well ready, not a moment sooner.

So in the 21 years before the turn of the century, she released five studio albums, though in the 17 years since, she’s released seven, which is opposite of the normal pattern, and probably spurred by her sense of mortality. Or something.

For me, the highlight of Sweet Old World was this contender for Prettiest Song Ever Recorded, Americana Division, “Something About Happens When We Talk,” a duet with her guitar player & producer, Gurf Morlix.

You know how you just connect with some people? And every conversation with them is amazing and intense and special? Lucinda does.

If I had my way,
I’d be in your town.
I might not stay, but at least
I would have been around

With Benmont Tench providing atmospheric organ and Morlix spidering out glistening guitar leads, “Something About What Happens When We We Talk” captures that 4:00AM vibe where you realize that you’ve been talking until 4:00AM, even though that’s all you’re ever going to do.

Gorgeous and melancholy, “Something About What Happens When We Talk” is a reminder of every time I connected with anyone for just that one moment, but it never led anywhere.

“Something About What Happens When We Talk”


“Something About What Happens When We Talk” performed live on Austin City Limits, 1998