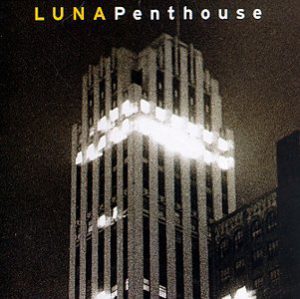 But it was Penthouse where Luna finally put it all together.

Featuring the strongest collection of songs that Dean Wareham had (or has, really) ever written, 1995’s Penthouse also remained a showcase for his effortlessly unique guitar playing, a perfect example of which was the dreamy “Sideshow by the Seashore.”

Featuring a curlicue tongue-twister riff that wound its way around the song, “Sideshow by The Seashore” reminded me of a lost Television song that was discovered by The Miss Alans. With his voice echoing in and around itself, Dean Wareham paints a picture on a $20 bill.

After each verse, the curlicue guitar lets up a bit, and the song comes to a bit of a rest, as the other guitars ping back and forth, and those of you who know The Miss Alans and have never heard this song (which I’m guessing is pretty much noone), but it reminds me so much of the Miss Alans I can’t even stand it.

It’s a coincidence, of course: both bands had been influenced by Television, and it just happened to come out this way to my ears. But since The Miss Alans had just broken up, it made me love “Sideshow By The Seashore” that much more.

“Sideshow by the Seashore”