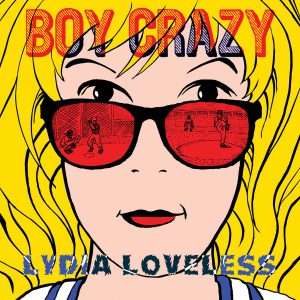 With records that straddle the line between alt-country and alt-rock — featuring her big soaring voice and big soaring guitars — Lydia Loveless has developed a pretty rabid fanbase over the past few years. One of the things that makes her so special is the emotional directness of her music, as typified by 2013’s “Boy Crazy.”

“Boy Crazy,” the title track to a 2013 EP which was just reissued a few weeks ago, starts off with Bill Lamb’s rumbling bass over Todd May’s squealing feedbacky guitar, joined at the hip by a jangly guitar, and has your attention before she even opens her mouth. But even more so afterwards . . .

And so she does, leading us into a frenzied cheating song where she’s found herself in a situation that she knows is wrong, shady, and sad-making. And with bassist Lamb providing more hooks than a bait and tackle shop, she leans into a situation she knows is entirely of her own making.

Also leaning into it: lead guitarist Todd May, who is piling on Lou Reed-levels of squalor and feedback, as if through sheer noise he can distract her from herself. Not likely, though. And she’s chanting “I can’t help it if I’m boy crazy” over and over at the end of the song, you almost get the impression that she’s having so much fun that even if she could help it, she wouldn’t.