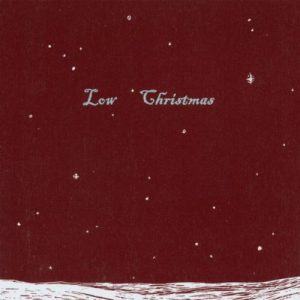 I love this song so much, I almost wrote it back in September when I was doing all of the other Low songs, but figured I’d save it for Christmas Eve instead. So here we are.

And while the lyrics suggest it might not be a Christmas song (the actual time of year is left vague), there is absolutely no doubt that it’s just a like a Christmas song, especially because it’s the lead track on a record called “Christmas.”

Featuring a jaunty “boomp-ba-doomp” bassline, a fuzzy, foggy organ and a beat chock full of sleigh bells, wooden blocks and huge echoing tom fills, “Just Like Christmas” would be nearly a classic even if Mimi Parker didn’t sing a note.

But of course she does, discussing a Norwegian tour that she and Alan Sparhawk had taken.

There isn’t any kind of “you idiot, you’re so wrong” tone in her vocals, more of a matter-of-fact reminder that snow doesn’t automatically equal Christmas, probably especially for folks from Minnesota, where it can get too cold to snow.

This all makes perfect sense to me: I’ve only ever experienced the platonic “white Christmas” ideal once in my entire life, and that was a when I was a little kid. I wasn’t that big of a fan of the whole thing, honestly. Turns out that snow is cold and wet. Who knew?

Anyways, the rest of the song is Parker repeating “It was just like Christmas” over and over again against her overdubbed backing vocals, the out-of-focus organ, the huge drum fills and even some acoustic guitar strums from Sparhawk.

“Just Like Christmas” doesn’t so much begin or end as slowly drive by you, spreading … well, not entirely good cheer, more like melancholic cheer. Which, to me, is the perfectly lovely thing for a song that is just like a Christmas song to do. After that, it drives off into the night, taillights fading into the fog. And isn’t that just like Christmas.