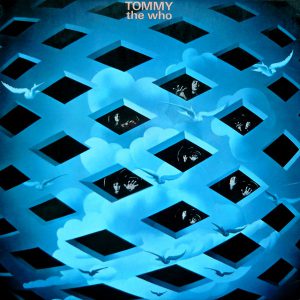 The thing about “Christmas,” of course, is that it’s really not a Christmas song.

But since it’s called “Christmas,” that means I can post something about it on Christmas Day, which is really just an excuse to write about The Who long before they come up alphabetically.

And while Tommy has never been anywhere near my favorite Who album — for the most part the guitars lack bite and Keith Moon is mixed way too low — “Christmas” is my favorite song on the album, the only time during Tommy’s childhood where the world is actually considered from his perspective.

But it’s not about Christmas. Christmas songs are about how wonderful and magical Christmas is, for example “Christmas Wrapping” or “Fairytale of New York.” If not that, then they’re about how sad it is that we all can’t be together this Christmas. Or, if you’re of a religious bent, how awesome it is that the babby Jesus was born to redeem us of our sins.

“Christmas” is about none of that stuff.

“But wait a second, Jim,” you might say. “Of course “Christmas” is about Christmas: it’s right there in the title, not to mention the opening verse!”

BTW, before we move on, this is some absolutely stellar lyric-writing. “Excited”/”ignited” and “generosity/curiosity” are great in and of themselves, but dig the amazing internal rhyme at the end: “Peep-,” “see” “free” and “-ty” which gives that opening an extra bit of pathos and power.

Anyways, if Pete Townshend wanted to properly explain just how much Tommy witnessing his stepfather murdering his real father fucked him up and caused him to retreat inward, then what better way than to use Tommy’s utter disconnection from single biggest yearly event in Western Civilization as an example. He is so lost that his very soul might be imperiled!

Tommy doesn’t know what any day is. That’s why they’re trying so hard to get through to him. “Tommy can you hear me?” they ask over and over and over and over to no avail. And not just on Christmas, but every day. But he just sits there, maybe playing pinball if they shove one in front of him.

If “Christmas” was truly about Christmas, wouldn’t there have been a Christmas miracle? Wouldn’t he wake up right then and there? “Hi mom, thanks for the poxy pinball.”

In Ken Russell’s gloriously awful film that I love to pieces, Tommy’s disconnection hammered home by all of the other kids blowing their horns at him. And actually it’s probably a secret blessing that Tommy stayed deaf, dumb & blind, because had he woken up then and there, Oliver Reed’s singing would sent him right back down.

And by the way, what friends? How does Tommy have “friends” if he doesn’t react to any stimuli whatsoever? And even so, if you were a little kid, why would you want to go to a Christmas party where a deaf, dumb and blind kid was at the center of it? “Mama, do we have to go to the Walker’s again? Tommy totally creeps me out!!!”

And speaking of which: Barry Winch, the poor kid playing Tommy in the film was probably traumatized for life during the filming of that scene. “OK, Barry, you have to sit very very still while a bunch of people yell at you, blow horns at you and — our deepest apologies — Oliver Reed sings at you.” According to IMDB, he had one other credit, in 1977, and after that, he was out.

Meanwhile, back in “Christmas” the song, just as you think things couldn’t get any more tragic, we’re exposed to Tommy’s inner dialog, a million miles away from any attempt to reach him. They keep asking if he can hear them, and he doesn’t even know that anybody’s around him.

See me
Feel me
Touch me
Heal me

Yeah, good luck with that, Tommy.

Musically, “Christmas” starts off as one of the more raucous songs on Tommy, all Pete Townshend power chords, one of Daltrey’s tougher vocals — his screams of “yeahhhhh!! during the chorus are pure power –drenched with alternately gorgeous and garbled backing vocals, and the usual virtuosity and madness from John Entwistle and Keith Moon.

And while it flags a during the “Tommy can you hear me?” / “See me, feel me, touch me, eat me,” mid-section, that part is so beautiful — and Moon’s interplay with Townshend’s vocals so interesting — it doesn’t matter, especially when steams back to life for the rest of the song with a slightly-too-long and somewhat impossible drum roll.

So “Christmas” is wonderful and powerful and emotional and a prime example of everything that made The Who ridiculous and great. But it sure as hell ain’t a Christmas song. Merry Christmas!


“Christmas” from TOMMY the Movie