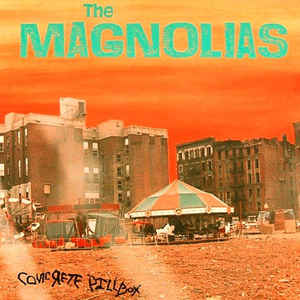 And while, as an album, I prefer 1992’s more polished Off The Hook, — and haven’t heard any of the others — the last song on Concrete Pillbox, “One More Reason,” is as pure of a distillation of noisy, melodic & bratty punk rock as came out in the mid-1980s.

Featuring an arcing, screaming guitar riff over crunching chords supersonic drums, lead Magnolia John Freeman screams his early-20s angst in an affecting, cathartic way, especially on the second verse, which I love beyond all reason.

And I bang my head against the door
Throw my guitar across the floor
Got a smoke in one hand, drink in another
“Turn that fucking music down!” says my motherrrrrrr

Like there’s not a doubt in my mind that this verse is straight-up reportage of a thing that happened to Freeman all of the time. And as great as all of the anger and angst of the verses are, they’re topped time and time again by the anthemic chorus, which switches up the whole song without losing the momentum as the guitars get choppy, the beat gets almost bouncy and bassist John Paul Joyce tosses out massive hooks as Freeman shouts:

And yes, I’ll be the first to admit that, musically, this all sounds very Hüskeresque, but in 1986, there still weren’t a lot of bands picking up on what the Hüskers were putting down, and besides, I loved that sound so much that I was absolutely fine with other bands — Moving Targets, Dinosaur Jr, Squirrel Bait, etc. — exploring it.

For me, especially in the mid-1980s, songs like “One More Reason” were reasons enough to live one of those songs to put on a mixtape and then shout along with the chorus every time it came up when I was driving. Or even better, playing it on KFSR and turning the studio monitors up loud loud loud.