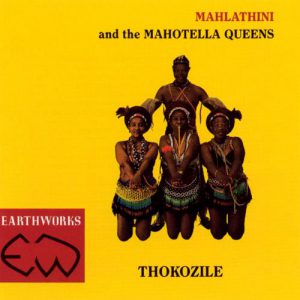 In the early part of the awful summer of 1988, having just been blown away by the still-amazing The Indestructible Beat of Soweto — and unable to find a full album by my favorite artist on that comp, Udokotela Shange Namajaha (it took me almost 30 years to find one) (but i did!) — I took a flyer on a full album by one of the artists on that compilation, Mahlathini, who was known as the “Lion of Soweto” for reasons that were obvious the moment you heard him sing.

That album was called Thokozile, and while I didn’t understand a single word on it, as always, the music and performances were amazing.

The internet tells me that “Thokozile” is a joyous wedding song, and I can get behind that, because it absolutely sounds like one, with the backing vocals of the Mahotella Queens contrasting with Mahlathini’s deep groaning voice and perhaps the only pennywhistle solo I’m going to write about in all of Certain Songs. (Though we haven’t got to the Pogues yet, so I could be wrong.)

Another key piece was the backing by The Makgona Tsohle Band — who apparently had been working with Mahlathini off and on for a long time, and you could hear the interplay between the guitar and the rhythm section, always propulsive and moving forward, but providing a lot of space for the Mahotella Queens to tell the story and Mahlathini to comment upon it.

This was all a bit of a surprise: Mahlathini’s original heyday was the 1960s, but the success of the Indestructible Beat of Soweto and Paul Simon’s Graceland opened up the possibility that his music would be heard by dabbling dilettantes such as myself, and hell, they even made a video for it.