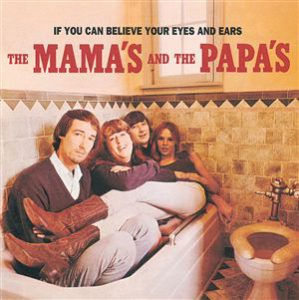 Album: If You Can Believe Your Eyes and Ears
Year: 1965

While it’s kinda bad form to misuse apostrophes for your band name — check the horribly named album cover to the left — that’s pretty much the only misstep one could accuse this other perfect piece of pop songcraft of taking.

An early reason why Lou Adler gets to sit next to Jack Nicholson at Lakers games, “California Dreaming” is an airtight piece of baroque folk rock that lives and dies on the vocal harmonies of The Mamas & The Papas. But mostly lives.

Over a backing track provided by the legendary Wreckin’ Crew (listen to how drummer Hal Blaine effortlessly double-times during the choruses & solo) Cass Elliott & the incandescent Michelle Phillips camping out in one speaker and John Phillips and Denny Doherty in the other speaker, “California Dreamin'” comes out of the gate with everybody singing circles around each other.

In terms of mid-winter myth-making, “California Dreamin'” is up there with the Rose Parade. Nearly every year, it’s gorgeous and sunny at 8:00am in Pasadena, and every year I wonder how many people surrounded by snow make the decision to move here before the parade is even halfway over.

As it turned out, those harmonies were so massive and catchy, it didn’t even matter that there was a longer-than-expected flute solo (Ian Anderson musta been paying attention) in the middle song. It actually provided a breather.

It was, of course, a massive hit, peaking at #4, and starting an impressive two-year chart run for The Mamas & The Papas.t And of course, a half-century later, California Dreamin’ is as iconic of a song about my home state as has ever been written, covered by everybody from R.E.M. (I remember a bootleg from the 1984 tour that opened with it) to Queen Latifah.