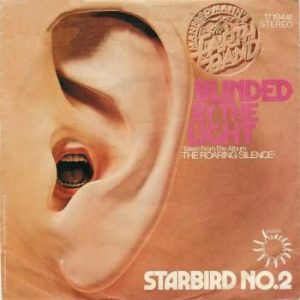 Heh. I can almost hear the head-shaking and silent denunciations from my fellow Bruce Springsteen fans for choosing to write about this epic piece of prog-pop trash, and not about the jazzy R&B opening track of Springsteen’s career.

But fuck that: I’ve always loved this ridiculous arrangement, which — in my defense came out when I was 13 — pretty much owned the summer of 1976 on both the AM and FM radios. So I could hear the single on KYNO-AM, which was all chorus verse chorus verse chorus, and then flip over to KFIG or Rock 96FM and hear the album version, which was where the fun was.

While Bruce’s version opened with the word salad over lyricism that showed he was trying too hard (not an insult, trying too hard is exactly what made him an immortal), Manfred Mann’s version went straight to chorus, which — as sung by rhythm guitarist Chris Hamlet Thompson over a repeating Townshendesque keyboard part — I and millions of other adolescents heard as:

Now I’m not going to say that it was another case of “Louie Louie,” but dude was getting away with “douche” on the radio! Of course, he really wasn’t, and all we had to do in 1976 was google the lyrics to find out that he was really singing “revved up like a deuce,” which itself was a bastardization of Bruce’s original (and way better) “cut loose like a deuce.”

But sure, why not? That was one of many many weird choices that characterized “Blinded by the Light,” like the way the first couple of choruses faded out instead of ending, like they were still going on out there, or all of the weird synth squiggles that announced the second and third chorus.

And it was after the third chorus where things got really weird. They don’t really finish it, but instead stop the song dead, slowing the beat to a crawl, because it’s time for a very long, very wanky wah-wah guitar solo by lead guitarist Dave Flett, which gets longer and wankier as it goes on until the stop the song dead so that Thompson can sing what has been a meme for me for over forty years.

Seriously, I can’t even glance at the sun without having “But mama, that’s where the fun is” going through my head. And I don’t even know how many times I’ve used it as a punchline.

By the time you processed “Chopsticks,” they were already into another verse and one last chorus, but this time, as Thompson is singing the chorus over and over and over, Manfred Mann is singing the verses against him, and it’s utter insanity for a minute or so — who knows what the hell is going on anymore? — but at the same time, it’s kind of beautiful, too.

This crazy-ass thing became a huge huge huge single — eventually making it to #1 right around the time I started high school — as well as an annoyance on the radio ever since. Because, mama, that’s where the fun is.

“Blinded by the Light”


The single version of “Blinded by the Light” lip-synched

Every Certain Song Ever
A filterable, searchable & sortable somewhat up to date database with links to every “Certain Song” post I’ve ever written.