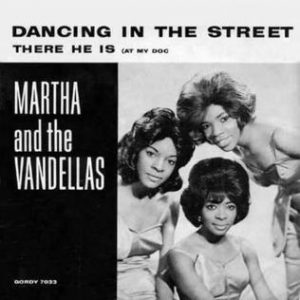 Initially conceived as a basic dance party track, “Dancing in the Street” has instead become a cultural touchstone used for purposes far beyond its initial reason for existing.

Co-written by Marvin Gaye (who also provided some dynamite drums), producer William “Mickey” Stevenson & songwriter Ivy Jo Hunter, what initially set “Dancing in the Street” apart was its inclusiveness: it wasn’t about dancing alone to the radio, it wasn’t about you and me dancing, or even all of us at the club dancing, it was about everybody everywhere dancing.

Calling out around the world
Are you ready for a brand new beat?
Summer’s here and the time is right
For dancing in the street

And it was that inclusiveness that also turned it into a civil rights anthem: after all “dancing in the street” could — and did — easily become a metaphor for large demonstrations, where it was routinely played, and instead began to represent something much larger than just a pop song about dancing.

But only barely, because back in “Dancing in the Street” momentum was gathering like a steam train choogling along to Gaye’s relentless beat: Chicago, New Orleans, New York City, Baltimore, D.C., Detroit — can’t forget the Motor City — hell, even in L.A., because the formula for getting people dancing is simple as hell.

All we need is music, sweet music
There’ll be music everywhere
There’ll be swinging and swaying and records playing
Dancing in the street
Oh, it doesn’t matter what you wear
Just as long as you are there

And even if it was just about dancing in the street, losing yourself to sweet sweet music in public, it would be powerful and pure. That it turned out to be about much more is what made it immortal.

“Dancing in the Street”