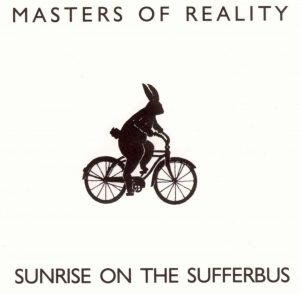 When you name your band after a Black Sabbath album, but aren’t really a metal band and instead play the kind of bluesy hard rock that was the precursor to metal, you’re already stacking the deck against yourself a bit.

And so nobody really knew what to make of Masters of Reality’s self-titled debut album, both in 1988 when it was originally released and in its 1990 re-release. After all, it didn’t really fit during the hairmetal heyday, but it wasn’t quite as out there as Jane’s Addiction or an undeniable as Guns N’ Roses. So it made a small splash, but not much more.

And that was when things got weird: given that the lead Master, guitarist & songwriter Chris Goss sounded just like Jack Bruce, it only made sense that they recruit Ginger Baker to play drums.

And so, with Baker on board, they recorded 1992’s Sunrise on the Sufferbus, a record that was even more out of step than their debut, and a quarter-century later still doesn’t sound like anything else. With Baker’s drums leading the way, many of the songs were an unique combination of piledriving guitar and lighter-than-air rhythms.

The best tunes included Ginger Baker bitching about American tea, the near doo-wop closer, and a 38-second string-laden question to the biggest pop star in the world that stands as one of my favorite songs of the decade.

But it opens with the roiling, rollicking “She Got Me (When She Got Her Dress On),” which starts with Baker beating the ever-loving shit out of his snare drum while Goss sings about a love object who won him over not by taking off her clothes, but rather putting them on. Or a specific piece, that is.

Halfway through, Goss uncorks a guitar solo that is basically the equivalent of Baker’s drum pattern, and for a short moment in time, they’re both buzzsawing against each other, neither giving an inch, until Goss finally blinks, almost shaking his head in admiration at what Baker’s doing.

Later on, he tries again, and manages to wrestle Baker’s drums to the ground just as the song thuds to a close. It’s a great way to open a weird, wonderful, eclectic record that I think sound better now that it did 25 years ago.

Oh, and if I ever open a Real Estate office, I’m totally going to call it “Masters of Realty.”

“She Got Me (When She Got Her Dress On)”