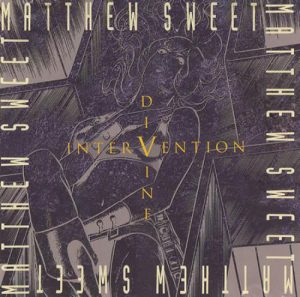 Where do you start with Girlfriend? How out of left field it was? The two ace guitarists that Matthew Sweet recruited? The amazing production? The fact that it was a standout even during my all-time favorite not just year, but season of record-buying, the Autumn of 1991, where it was surrounded with Nevermind, Achtung Baby!, Apocalypse 91, the Illusion twins, Weld, Trompe Le Monde and Bandwagonesque?

Maybe, but let’s start with where Girlfriend starts, the falling from heaven of Richard Lloyd’s guitar and Matthew Sweet’s vocals that crash land into a bass-heavy beat that is equal parts Revolver and Everybody Knows This is Nowhere.

And this is how “Divine Intervention” sets lets us know the production strategy for Girlfriend: every instrument having its own space in the mix. Matthew Sweet’s bass in the center and his rhythm guitar over in one corner are barely on speaking terms i, while Rick Menck’s drums are set up over there in the other corner, along with Sweet’s slowly Velvety piano, all of which leaves plenty of space for Sweet’s vocals.

It also leaves room for Richard Lloyd’s guitar. Plenty of room. So much room.

I’m trying to remember here, but while I’d purchased both of Lloyd’s solo albums to date, neither one blew me away (Field of Fire, in particular, was sabotaged by terrible 80s production). And so, nothing that Lloyd had done since his amazing solo on the coda of Television’s “Ain’t That Nothing” prepared me for the onslaught of awesomeness that he unleashed on “Divine Intervention.”

Even before Sweet opens his mouth, Lloyd is already swirling and swooping around the song, commenting here and there, but waiting until after the second verse to truly take off after Sweet’s overdubbed “alright, alright,” spitting endless curlicues of notes that only get derailed during a particularly evil backwards tape reverse that takes the place of the third chorus.

After that, it’s just solo after solo, especially after Sweet stops the song again after chanting “When he comes the sun shines” to implore Lloyd to take off with a cheery “here it comes!”

And as “Divine Intervention” fades in and out of its fake ending and then real ending, Lloyd remains completely on fire, and if you’d never heard Matthew Sweet or Richard Lloyd before, you could be excused for wanting more, a lot more, like this instant.