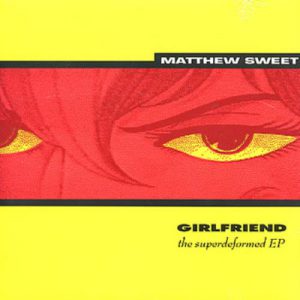 Along with Steve Wynn and Nicky Hopkins, Robert Quine is one of those guys who is going to show up in more than one artist’s Certain Songs entry.

I’ve already written about his work backing Lou Reed and Lloyd Cole, and will eventually discuss his work with Richard Hell, not to mention his semi-authorized bootlegging of The Velvet Underground.

And so Robert Quine is a key figure in the legend of Girlfriend, making his first appearance like a laser beam on the title track, which is essentially a duel between Quine and drummer Fred Maher, who funks it up through the song, stopping and starting with impunity. Also, that drum sound! Like Maher was all the way on the other side of the room when they recorded the song, because if he got any closer, he’d flatten them like a truck.

Meanwhile, Matthew Sweet — backed by an army of overdubbed Matthew Sweets who interject “ahhhhhh” at surgically precise moments throughout the choruses — asks a very pertinent question.

Don’t you need to
Be back in the arms of a good friend?
Oh, ’cause, honey, believe me
I’d sure love to call you my girlfriend

“Girlfriend” is the loosest song on Girlfriend, all jiggery-pokery Chuck Berry rhythm guitar, collasping drum breaks, and Quine everywhere at once, bouncing from speaker to speaker like a rubber ball in a closet.

And it was loose enough that live, after the second or third guitar break, they’d do one chorus as a slow blues before revving it up for the close.

The combination of all those guitars, hooks and the sheer fun everyone was having — plus a clever, anime-themed video — turned “Girlfriend” into a big Modern Rock hit, which even got some mainstream radio play, though it did nothing on the pop charts.