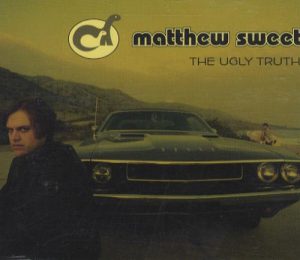 After the utterly fresh blast of Girlfriend, it was inevitable that Altered Beast was going to be a letdown. So, like its contemporary follow-ups to classic power-pop records, Teenage Fanclub’s Thirteen and The Posies’s Frosting on the Beater, I severely underrated Altered Beast when it came out in 1993.

The main reason, I recall is that unlike the every-instrument-in-its-own-space sound that dominated Girlfriend, the sound on Altered Beast — co-produced with Richard Dashut, who produced Rumours and Tusk (which now that I think of it, was a definite sonic precursor to Girlfriend) — was more of a jumble, making it harder to isolate individual instruments.

All these years later, of course, none of that matters, and even at the time, it was easy for me to love songs like “Devil With The Green Eyes,” “Time Capsule” and the song that got two versions, “The Ugly Truth.” And actually, the two versions of “The Ugly Truth” perfectly encapsulate the somewhat schizophrenic nature of Altered Beast.

The first version — and the one that I prefer by a hair — features the usual massed overdubbed Matthew Sweet vocals, some jangly Robert Quine leads buried in the mix, and some absolutely flying fiddle from Byron Berline. And in fact, Berline’s fiddle dominates the song, especially in the second half.

Meanwhile, “Ugly Truth Rock” features a mostly naked lead vocal from Matthew Sweet and some ugly, obnoxious guitar leads from Quine, who takes a wah-wah peddle and runs it through a shredder. On paper, it should be the one I like more, right, but in truth, the beauty of guitars-fiddle-harmonies version wins out.

And what’s weird is that Sweet wrote and demoed dozens of songs for Altered Beast — many of which are as good as anything that ended up on it — and yet he ends up putting two different versions of “The Ugly Truth” on the final product. Two great versions.