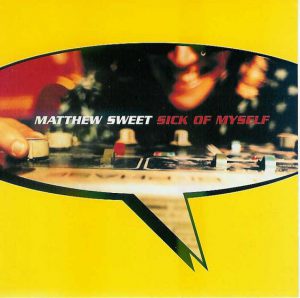 Produced by producer d’jour Brendan O’Brien and featuring an absolutely adorable cover photo of young Matthew Sweet listening to an album via some huge headphones, 1995’s 100% Fun definitely felt like a comeback after what I then still felt was the scatteredness of Altered Beast.

And that comeback was evident right from the start, as “Sick of Myself” came roaring out of the gate with a noisy, crunchy rhythm guitar over which Mr. Richard Lloyd started soloing even before Sweet even opened his mouth to sing about his latest round of self-loathing.

With Lloyd spitting fire after every single chorus, “Sick of Myself” ranked with Sweet’s hardest riff-rockers like “Dinosaur Act,” “Superdeformed,” and “Ultrasuede,” but because of the massive hook on the chorus, also felt lighter then air at the same time.

At the end of the song, Sweet, Menck and Lloyd are having so much fun that they keep bringing the song to an end, and starting it back up, just so Lloyd can knock off yet another crazy solo. “One more time,” Sweet grins just before the last one, because why the hell not?

That combination for lightness and power was what contributed to “Sick of Myself” becoming Matthew Sweets biggest song, reaching #2 on the Billboard Modern Rock charts and even #58 on the pop charts, the only time a guy who should have been absolutely huge even sniffed massive success, though 100% Fun did go gold.


“Sick of Myself” performed live (w/Ivan Julian) on Late Show With David Letterman, 1995