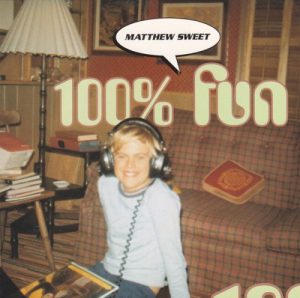 “But Jim,” you didn’t ask, “you’ve been writing about of these posts about Matthew Sweet songs where he had either Richard Lloyd or Robert Quine play lead guitar, but I’m wondering did they ever play on the same song??”

With Sweet manning a theremin, drummer Ric Menck overworking his snare on a jumpy, jittering beat and ace producer Brendan O’Brien playing the Brian Jones memorial mellotron, “Lost My Mind” sounds a lot like “2000 Light Years From Home” as conceived by the Velvet Underground, especially in the second half as both Quine and Lloyd speed by like deranged, damaged satellites.

“Lost My Mind” is basically a series of controlled explosions, held together only by Menck’s relentless drums and — of course — Sweet’s massed vocal overdubs. To be honest, it’s so over-the-top that it’s probably a song that a lot of people who bought this album because of “Sick of Myself” or “We’re The Same” actually programmed their CD changers to skip.