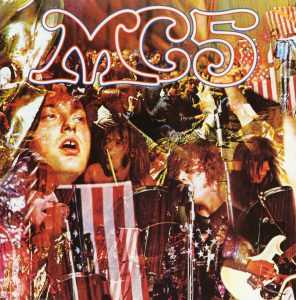 It’s one of the most famous intros in rock history:

KICK OUT THE JAMS, MOTHERFUCKERS!!

Of course, that’s not how first I heard it.

Not only did I first hear “Kick Out The Jams” with the intro being “Kick out the jams, Brothers and Sisters!” it was also a cover: Blue Öyster Cult covered it on their Some Enchanted Evening album. I first heard MC5’s version on a compilation that I read about in CREEM Magazine called Michigan Rocks.

Unless it was the other way around, of course. It’s also possible that the Michigan Rocks version had the uncensored version — I actually spent a good bit of time poking around on the internet trying to determine this, and given the song length, I don’t think so, so when I finally got to hear the proper intro to “Kick Out The Jams” is lost to history.

What isn’t lost to history, of course, is the muddy-sounding proto-punk that makes up the song itself. While it went to their populist bent to record their first album live, the fact is that their sound was too motherfucking cranked for 1968, and the dual guitars of Fred “Sonic” Smith and Wayne Kramer almost get swallowed up in their own roar.

Almost. Because one thing is for sure: even with the rhythm section also swallowed up to the point of non-existence, and Rob Tyner’s lead vocals, screams, exhortations and interjections barely heard above the din, “Kick Out The Jams” remains a shooting star of pure energy, utterly thrilling every single time it slams through a wall as it heads into the immortal chorus.

And so what would seem to be the weakness of “Kick Out The Jams” — the fact that it’s continually threatening to tear itself apart — is actually its strength: its a series of barely controlled explosions always verging on, but never quite blowing itself out of existence.

“Kick Out The Jams”


An extended “Kick Out The Jams” performed live on “Beat Club” in Germany, 1972