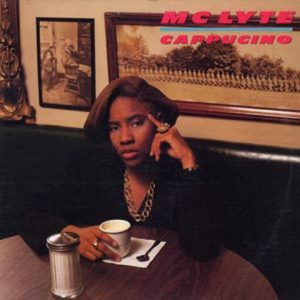 I wasn’t a regular watcher of either 120 Minutes or Yo! MTV Raps, but I definitely tuned in to each on occasion, and I’m pretty sure it was on the latter program where I first encountered MC Lyte’s hallucinatory fever dream “Cappucino.”

After walking into a cafe on the Westside for a cup of the titular drink, Lyte finds herself in the middle of a drug deal, and killed in the crossfire.

And as she’s in limbo between life and death, she’s got just one thought on her mind.

After encountering other dead people — people who died because of drugs, alcohol, jealousy — she asks “Why do people make livin’ so complicated?” just as she wakes up and realizes it was all a dream. Or was it?

In the last verse, she answers the question she’s been asking throughout the entire song, and in the end has a realization.

They charge you 3 dollars, you ask is it worth it?
But when you start drinkin… shit, it’d be workin
I’m hooked, well, I was, cause, yo, it’s the best
But if everytime I drink I voyage through death
I leave it alone and just stick to tea
Cappucino was fly, but too fly for me

Darkly funny and deeply philosophical, “Cappucino” is an absolute tour de force look at how seemingly meaningless things can give give pleasure in a life that is harder than it probably should be, as well as how easy and random it is to be in the wrong place at the wrong time.