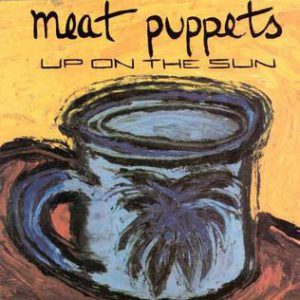 The mid-1980s at SST Records was really something, wasn’t it?

First off, all of their bands had amazing names — my absolute favorite was Blind Idiot God — and secondly (and yeah, more importantly), they had a bunch of bands that were taking punk rock in myriad directions.

Here’s just a few of the now-legendary names that graced their labe: Black Flag, Sonic Youth, Minutemen, Hüsker Dü, Dinosaur Jr, and of course, the Meat Puppets, who went from sheer sonic madness to spacey psychedelia in the course of just a couple of record.

If their transition album was the Cobain-approved, country-influenced Meat Puppets II, then their early pinnacle was 1985’s Up on The Sun. With Curt Kirkwood layering guitars like he was The Edge, bassist brother Cris and drummer Derek Bostrom totally in tune with the languid beats, Up On The Sun sounded amazing.

On songs like like “Swimming Ground,” “Away” and the instrumental-with-whistling “Maidens Milk,” guitar hooks floated out of the mix like pot smoke from a teenager’s window. Not nearly as much with the vocal hooks, though, even on “Away,” where they really really tried.

Because it was the singing that was always my sticking point with the Meat Puppets: I could never get fully onboard with Kirkwood’s particular brand of tunelessness, though over the years, I’ve come to enjoy his stoney languid vocals at the opening of “Up on the Sun.”

Over a guitar lick that sounds like the squiggly lines that emanate from a child’s drawing of a particularly hot sun, Curt Kirkwood sings:

Since the song is actually about his daughter, it actually made almost linear sense. Or at least as much linear sense as Kirkwood wanted to make, as most of “Up On The Sun” meanders around from point to point like Jeffy in one of those old Family Circus cartoons — stopping here to pet a doggy, stopping there to smell a flower — completely unmoored and completely happy as it basks in its swirling guitar tones.

Which is why it’s almost a shock at the end of the song when it gathers itself for the coda, featuring both Kirkwoods singing together over what would almost pass for power chords.

Because this unexpected moment of focus comes out of nowhere, they repeat it — just to make sure that you realize they realize its a moment of focus — and then allow “Up on the Sun” to finally just kind of slowly disintegrate.