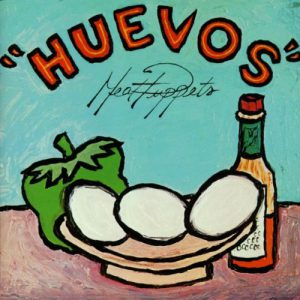 Confession time: I’m not nearly as up on the Meat Puppets as I probably should be. I listened to all of their 80s post-Up on the Sun albums at KFSR, but I didn’t buy any, opting to go with 1990s No Strings Attached compilation instead.

And while I did try their post Nirvana Unplugged records Too High to Die and No Joke nothing really stuck with me, and I remember reading a really sad article about Cris Kirkwood’s subsequent battle with heroin, a battle that he eventually won, after which I tried 2009’s —
and really enjoyed 2009’s Sewn Together.

The upshot is that I’ve dipped in and out of their catalog for the past 30 years, and feel like maybe a more thorough examination of their late 1980s work is in order, because it’s entirely possible that there are more songs I’d love as much as I enjoy “Look at the Rain,” from 1987’s Huevos.

Huevos was apparently inspired by a fan letter from ZZ Top’s Billy Gibbons, a detail that was no doubt scandalous in 1987 and is now totally cool, and whether or not you can hear it in “Look at the Rain,” what you can hear is a big, hooky rock song.

Featuring a furiously-strummed rhythm guitar over which Curt Kirkwood lays his typical corkscrew leads and great couplets like:

“Look at the Rain” lives and dies on the chorus, where Kirkwood strains his vocals to the edge of reason belting out a melody that was begging and pleading for a much better singer to sing it.

And while it’s irritating at first, by the end, you’re totally into it because it’s clear that he’s totally into it, and after that you notice all of the awesome guitar playing, as well.

Fan-made video for “Look at the Rain”