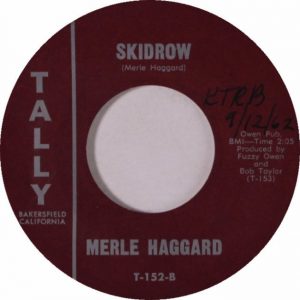 Merle Haggard is another one of those artists where I spent years and years figuring that I’d get around to him eventually, but it took his death a couple of years ago for me to finally dig out the Down Every Road box set and see what I’d been missing all these years.

Turns out, quite a lot, and honestly, I’m still working my way through it, but it was clear that Merle Haggard pretty much had his thing in mind from the very start.

One of the very first things — if not the very first thing — that Merle Haggard ever recorded, “Skid Road” was recorded in Bakersfield just a couple of miles away from where my grandparents lived, and it encapsulates pretty much everything that made him great: sparse, guitar-driven arrangements, over which his crystal-clear voice sings words about a man whose life has taken a turn for the worse.

What’s so cool about “Skid Row” is Haggard doesn’t sound very down-and-out when he’s singing it: the beat is uptempo, the backing vocals playful and Haggard himself seeming almost joyous to be there. In the end you can practically see him moving from the corner of Skid Row towards the inner depths.