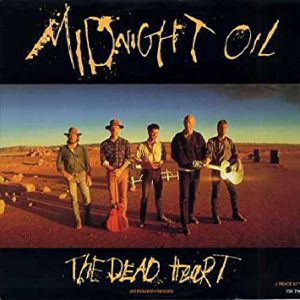 1988 in America, of course. Diesel & Dust came out in Australia in the summer of 1987. Given that Columbia had no reason to expect it to be a hit record when the previous two had stiffed, they delayed its release here for several months, so it showed up in the spring of 1988. However, since spring of 1988 was a tiny period where veteran Australian bands could somehow have MTV-driven hit singles here in America — the other one being The Church’s “Under The Milky Way” — “Beds Are Burning” became a pretty big hit.

And as fine as that song was, I was totally struck by “The Dead Heart,” which was probably the most straightforward song they’d yet written, featuring an almost unvarying tick-tock kick-drum heavy beat and an ominous chant of “doo da, doo da, doo da doo” which served as the entire melodic basis of the song.

Written from the point of Australia’s Aboriginal population, “The Dead Heart” only varied from that chant when it went into its defiant chorus.

The end of the song, which piles on strings, horns and even a glockenspiel all playing variations on its main theme while Garrett sings “the dead heart lives here” in his scariest voice as the rest of the band keeps up the chant is equal parts mysterious and uplifting.