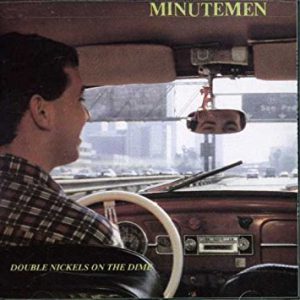 Like their power trio contemporaries, labelmates and friendly rivals, Hüsker Dü, the Minutemen were both incredibly prolific and getting better by leaps and bounds. And yet it was still a massive shock when both bands released their twin landmark double-albums, Zen Arcade and Double Nickles on The Dime, during the long hot summer of 1984.

The irony, of course, is while the straightforward pop-punk of the Hüskers was always far more my jam than the jazz econo of the Minutemen, the Hüskers never wrote a song that resonated to me as personally on a lyrical level than the opening verse of “History Lesson Part II.”

Our band could be your life
Real names be proof
Me and Mike Watt, we played for years
Punk rock changed our lives

Wow. As written by bassist Mike Watt but sung by guitarist D. Boon, so much to unpack there.

“Our band could be your life / Real names be proof.” Anybody can do this, just pick up some instruments, find some friends and go for it.

“Me and Mike Watt, we played for years / Punk rock changed our lives.” Simple, straightforward, and so fucking profound. They had already chosen to play music with each other, but punk rock gave them direction, a purpose, a cover story.

Even though I never considered myself a punk rocker, punk rock changed my life. Discovering The Clash, The Jam, Ramones, X, Sex Pistols, Television and did I mention The Clash made me a completely different person in just about every way but sartorially.

But most importantly, punk rock taught me two things:

Mr. Narrator
This is Bob Dylan to me
My story could be his songs
I’m his soldier child

And I wasn’t alone: that was the point of “History Lesson Part II.” There were thousands of us — someday even millions — who experienced that seismic shift: one day, you’re grooving on Bob Dylan and CCR and Blue Oyster Cult, and the next second, you’re listening to The Clash and Richard Hell and X, and your horizons have been forever widened.

But — and this is key to me — even though you were changed, you didn’t necessarily have to reject everything that came before. Widened, not shifted.

Our band is scientist rock
But I was E. Bloom, Richard Hell
Joe Strummer and John Doe
Me and Mike Watt, playing guitar

That’s why the Dylan and Eric Bloom references in “History Lesson (Part II)” are so important: the Minutemen were totally and completely unique, but they still incorporated all of those influences — including the non-punk ones — because the music you make is the sum of your experiences. Or at least, the best music is.

And punk rock let them understand that they could make that music, and they could let it be as weird and unique as it was. And so while I never fully loved their music, I sure did love them.