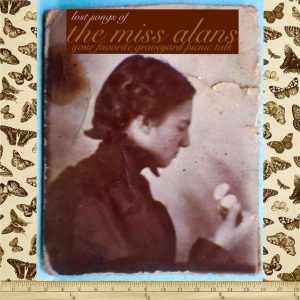 The Miss Alans were incredibly prolific.

Last year, when I started helping out with the digital reissues, I put together a Google spreadsheet to track all of the songs that I knew of. Right now it sits at 113 originals (and 8 covers), and I guarantee you that there are a probably a couple dozen of songs that I’m missing, especially from the post-Blusher period when I moved from Fresno.

And one of the things I did to help out with the digital reissues was to go through all of the cassettes that Kirk & I had kept over the years and get them digitized. It was a mixed bag: early dubs of Blusher & Smack The Horse, the Discordia! recordings and loads of rehearsal tapes from the late 1980s. So. Many. Rehearsal. Tapes.

Now I’d had some of these in my possession for years, as the guys were always nice enough to give me tapes of what they had recorded, but there was a lot of the rehearsal tapes I simply hadn’t heard, especially from the post-Bus, pre-Smack The Horse period where they were writing songs at a furious pace, even while at a bit of loggerheads in terms of direction.

But there were songs that I never heard a recording of: like “Once First, Once Last,” or “The Haunt” or even — and this was a little bit later — their cover of “Dancing Days.”

One of those songs was called “For Right Now,” and in the scheme of things, it wasn’t a major song. But it was the one I liked. A lot. But I was in the minority, so it wasn’t recorded for either the unreleased album or Smack The Horse, and it never showed up on any of the rehearsal tapes I was slipped, it was lost to the mists of time.

And so, after awhile, it became a ghost, a phantom, a memory of a memory. I didn’t even remember how it went. I just knew that once upon a time, there was a song The Miss Alans played at their shows called “For Right Now,” and that I really liked that song. And that, I figured, was that.

And suddenly, it’s 30 years later, and I’m putting a bunch of things that I’ve ripped from that cache of cassettes in Dropbox for Scott, but I haven’t poured over every single inch of every single tape: I know that there are still rehearsal tapes I haven’t listened to, but I’m assuming that they’re the same ones I’d already had since the late 1980s.

But one Saturday late last year, I figured I’d better make damn sure. And it just goes to show how wrong you could be, because, lo and behold, these were different rehearsal tapes — a batch of songs that were candidates for Smack The Horse — and I don’t know I instantly recognized one of those songs as “For Right Now,” but I instantly recognized that one of those songs was “For Right Now.”

Starting off with Manny picking out a spindly lead over at stop-start beat, not quite as dance-pop as some their other songs of that period, but definitely related, but exploding at the chorus.

During that chorus, Manny jingles and jangles, while stopping to bend his whammy bar while Jay & Ronnie keep moving forward, creating the illusion that the song is going tear itself apart, but it never really does, and at the end, they just keep moving forward while Scott chants “fresh clean air” over and over until Jay spins the song to an end with his bass.

Like I said, not is not a major song, not a great recording, but something I’m absolutely thrilled to have back in my life.

And so 30 or so years after it was written, Scott put it on a digital-only compilation of rehearsal tapes that he called Your Favorite Graveyard Picnic Talk, which was the working title of the record that was slated to follow Bus.

We’re going to get more into all of that in the next couple of days, but perversely, none of the songs released as Your Favorite Graveyard Picnic Talk were actually recorded in the studio during the original project.

That’s how prolific The Miss Alans were.