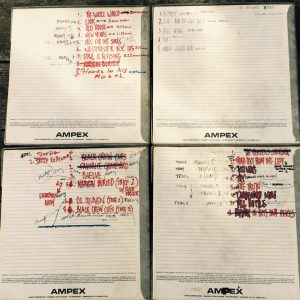 There is a lost Miss Alans album. It was to be called Your Favorite Graveyard Picnic Talk. Mostly recorded in 1988, the songs are dominated by tunes written and recorded during what Scott Oliver called the “Phantom Disco Period,” that post-Bus era where the dancey elements of their music overwhelmed everything else.

Which, of course, as someone who danced as much as he could to the Miss Alans, wasn’t terrible, but as a rockboy first, I will admit that it’s my least favorite period, especially when compared to where they went next.

But at the same time, just dismissing it offhand (and as I write this, I have no idea how many if any of those songs will come out on Remnants, and I’m not asking, because I want to be surprised) doesn’t make sense to me either. First off, it wasn’t all just dance songs: I’ve already written about “Westchester NY, 105” & “For Right Now,” but there was also the reassuring jangle of “Old House” and “Howl A Blessing,” the trippy goth of “The Haunt” and the flat-out show-closing ALL RIGHT!! power rock of “Once First, Once Last” (which some of you might remember as “Airborne!!!”). (No recordings have surfaced of those last two, so maybe we all dreamed them.)

And besides, it wasn’t so much the disco songs that I disliked, it was the lounge-pop songs full of too-delicate guitars and stilted rhythms that I really couldn’t stand. It was fine — or fine-ish — if they wanted to trade R.E.M. & The Smiths for New Order, but trading them for Aztec Camera and the Style Council, not so much.

Yes, I was a snob. That said, I knew that when they invited Mark Ribera (“Buddy Love!”) onstage to play one of those songs, I could slip away and take a piss and get another drink. Which probably sounds meaner than it was: I gotta pee and refill at some point, so it was nice to have a cue.

Over the years, I had a few of these recordings, but it was until I went through Kirk’s tapes last year where I discovered a whole bunch more. Perhaps these were the tapes that almost caused him to quit being their manager.

That said, 30 years later — and after an era where indie bands incorporated more dance rhythms into their music — there are some great things among those songs: Jay’s slippery bassline in “Eve and The First Dress,” the way Manny’s guitar weaves around Mark Ribera’s sax in “Cardboard Men,” and there’s probably not a person who ever heard “700 Ways” who forgot its deathless chorus, and that one was the most discoest Miss Alans song that ever discoed a disco, even with the long near-flamenco guitar solo Manny Diez lays on top of the studio recording. Though not “Black Crewcuts.” Never “Black Crewcuts.”

There was a pretty good record there, but not a great one.

And except for the deathless “Westchester, NY #105,” the highlight would have been “Marilyn Buried,” which is about 57 songs combined into one. I once went with Scott & Manny to an overdub session for this album, and I swear to gods the entire thing was him trying to lay down a short guitar passage exactly the way he heard it. I don’t recall which song it was for, so lets just say it was for this one, because his guitar is everywhere, a veritable hailstorm of notes.

Opening with a sighing scream by backing vocalist Tracy Hostmyer, followed almost instantly by a scream of pain and horror from what sounds like the whole band, “Marilyn Buried” almost instantly settles into a tension-filled stand-off between Jay, Scott & Manny who are all playing variations on the buh-duh buh-buh-buh-buh-duh-duh disco rhythms, and Ronny Woods, who has had enough of that shit and is almost playing a variation of the Bo Diddley beat, focusing almost exclusively on his snare.

For nearly five minutes, “Marilyn Buried” feels like it’s going in a hundred directions at once: Scott strumming his acoustic guitar like he’s trying to kill it, Ronny doing the same to his snare, Manny alternating between chickenscratching rhythm and swirling leads while both Scott & Tracy are wailing wailing wailing. Scott is probably singing some words, but I didn’t even wanna ask, as “Marilyn Buried” gets across on the craziness of its overall sound.

Holding the whole thing together through sheer force of will is Jay Fung, who still no doubt burst out laughing when Manny turns his fucking guitar into a tornado halfway through as if he’s trying to send the whole band to Oz right this very second.

In the end, Jay’s bass somehow lassos the song and brings it slowly to the ground.

“Marilyn Buried” was kind of an anomaly for The Miss Alans, a bit too slick and overstuffed when compared to their rockier material, but also a bit too unhinged for the era from whence it came. But, of course, that era was about to end, because on Labor Day weekend, 1988, Manny Diez was almost killed in a motorcycle accident.