In the beginning was The Wayne Foundation.

Mike Huffman, Jay Fung and Ron Woods were all KFSR DJs who realized that they had simpatico tastes in music and decided to form a band. I don’t think Mike was in a band at the time, but Ron was playing drums with a ska band called Secret Beat and Jay was the lead bass player in the Sandy Schaefer Memorial Swing Band, which absolutely killed it each Thursday night at The Bucket, Fresno State’s on-campus pub.

I’m not even kidding here: as led by the hilarious Mark Ribera on sax & vocals and featuring the unflappable Brian Hamada on drums, Swing Band was as reliable of a good time as could be had in Fresno at the time, but it did lead to a lot of early jokes at Jay’s expense about his being “only” a jazz musician and not a rock musician, because we were all dicks.

In any event, the earliest rehearsals were at Ron’s house — cos that’s where his drums were — and after trying a couple of options for a second guitar player, Mike brought in a friend of his, a quiet guy named Scott Oliver, and after it became clear he was a fit, musically and culturally, The Wayne Foundation was born. This was, I think, in early 1985. Nobody remembers for sure. 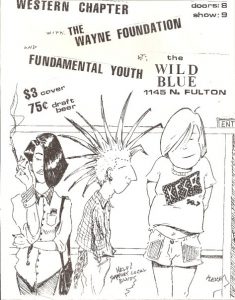 With the name coming from the TV show known then as simply Batman, The Wayne Foundation mixed interesting covers — the Easybeats raucous “Good Times,” a full-band version of of Bob Marley’s “Redemption Song, a slow-burn take on Duran Duran’s “Hungry Like The Wolf — with Mike’s power-pop originals, my favorites of which were “Man Who Lies” and “Why I Cry,” full of ringing guitars and great harmonies. Mike’s and Scott’s voices really complemented each other.

At some point — probably after he came back from New York — Scott started bringing in songs, two of which — “The Folk Song” and “The Farm Song” — were topical, if not political, with the latter becoming an instant live favorite because it alternated gorgeous vocal harmonies with a killer riff. 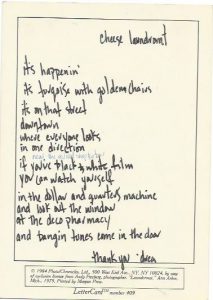 Then there was “I Hear Horses,” which was a totally different beast. For one thing, with a second verse that was based upon a poem that Andrea had sent to him on a postcard, “I Hear Horses” was far more impressionistic than the other two: the first set of Scott Oliver lyrics. Not as topical as the other two, but rather a paean to the transcendent pleasures of just hanging out with your friends deep into the night.

And for another thing, it was nearly twice as long as any of their other songs — after hearing a recording of their KFSR performance of it, Ron bemoaned they had written an epic — and secondly, it was denser and more complex than the rest of their songs, and definitely pointing towards a new direction for The Wayne Foundation.

A direction that would never be fulfilled, as it turns out. Sometimes, life gets in the way, and during the spring of 1986, it became apparent to Mike Huffman that being in a band, trying to graduate from college and being a father to a newborn baby was pulling him in too many directions. So he started missing rehearsals, and soon The Wayne Foundation broke up.

But Jay and Ron and Scott wanted to keep playing together — they’d been writing new songs at the rehearsals that Mike had missed, but it became clear they needed another guitar player. So they asked Manny Diez, who had been playing in a local cover band — doing songs that were on KFSR — called BEDS with Nate Butler, Darren Embry and Stan Schaeffer (I can’t remember the name of the new guy at work, but the configuration of bands from 35 years ago just trips off of my tongue), but wanted to do original material. 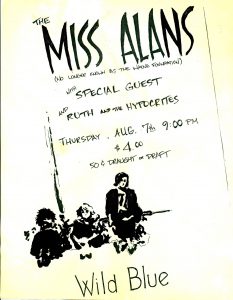 The irony was that when Scott went to New York, Mike, Jay and Ronnie had already tried to get Manny to join in his stead, but Manny couldn’t do it, so when Scott came back to Fresno, he was able to charm his way back into the band.

This time, Manny could do it, and almost instantly the musical chemistry was palpable, and The Miss Alans — the name taken from the maiden aunts in the film A Room With A View — were born.

Almost instantly they started writing new songs: “Society’s Coat,” “Trials of Your Children” and my early favorite, “The Women of James T. Kirk,” but they did keep one leftover from The Wayne Foundation era (which, remember, was only a few months previous), “I Hear Horses.”

That’s the first verse of “I Hear Horses,” which on one of the Wayne Foundation recordings I have of it performed live at the Blue doesn’t start until a full minute, after an acapella rendering of the chorus and a long, winding powerfully twisty intro.

All of the sounds of night that you want to hear
What Jane wants, Jane can’t have it

It was incredibly unwieldy. It was also incredibly popular, which meant that it was both a blessing and a curse: it was a reliable crowd-pleaser, but playing it meant that newer songs might not get enough room to become reliable crowd-pleasers. And it sure as shit didn’t make sense to record along with the songs from Bus or the more dancey & poppy songs they were writing in 1987-1988.

I mean, after all, the man had engineered Element of Light and I Often Dream of Trains. If the Miss Alans could even get a tiny bit of Robyn Hitchcock psychedelic fairy dust sprinkled on this recording, that would be awesome.

Of course, delaying the chorus is a great trick, something that early R.E.M. did a lot of — check “Radio Free Europe” or “Don’t Go Back to Rockville” — giving the chorus that much more power when it finally is revealed.

With Manny singing the harmonies, and a breakdown on the last verse with Scott not even bothering to sing the last word, that chorus invokes Patti Smith, Lloyd Cole and Lou Reed all at once. It’s lovely, thought-provoking and mysterious, while remaining completely singable from the moment you hear it.

So while the rearranged version of “I Hear Horses” seemed weird to me at first, I got used to it, especially since everything else that made “I Hear Horses” so great remained intact, and actually had been improved: the way that Jay and Ronnie were locked in during the verses, Manny’s arpeggio guitars winding through, and of course, the entire second half of the song, which still completely kills on every level.

We’ve just finished the third verse, which same as the first heads into the pre-chorus, but this time, it’s different. Instead of two lines and back to the riff, there’s some feedbacky guitar and Ron doing 16th notes on his hi-hat while Scott calmly stretches out his vocals:

And then wham! Ron barreling forward into a double-time, the rest of the guys straining to catch up while Scott remains calm, finishing out the pre-chorus.

All of the noise of the day
That may come too near
What Jane wants, maybe Jane can’t have it

But here’s the thing: they don’t go into the chorus. Not immediately, anyways. Instead, as Ron creates a lane with his kick and ride cymbal, Jay starts playing a big, melodic bass figure, notes reverberating in a perfect circle. Then, as Manny sends notes of feedback through the circle, Ron joins in, rolling and rolling and rolling on his snare as the circle gets tighter and tighter until he spins the song right off it its axis only to be caught by Scott, who merrily sings “tra-la-la-la la-la-la la-la-la” as he and Manny finally launch into singing the chorus once more.

At first, they’re in perfect lockstep, but after an initial iteration of the chorus — never resolving into actually hearing those horses — Scott and Manny diverge, and as Scott chants “take the time” and “won’t you listen to the flames of Jane’s faint sounds” and “higher and higher” Manny has only one thing on his mind:

Over and over and over, getting ever more intense, until at the fade all you can really hear is Manny, asking you to listen to the evening.

And, of course, the evening was where we lived — especially during the hot Fresno summers — the evening was when we hung out, congregating outside of clubs or our apartments or wandering around college campuses, just figuring shit out to evening’s faint sounds.