It happened so gradually and organically that nobody was really aware of it at the time — as Jay has pointed out, everybody was too busy living their lives to have had any real perspective — but starting with the recording of Smack The Horse, The Miss Alans started to become less and less of a Fresno-based band, and more and more of a Los Angeles-based one.

It wasn’t like how, say, Mudcrutch packed their bags from Gainesville, Florida and moved wholesale to LA in the early 1970s — L.A. was only a three-hour drive from Fresno, and everybody was still young enough to drive home after a gig if needed — but more in the way that their base of operations shifted south as the 80s turned into the early 90s. So at least in terms of their professional lives they were becoming more and more Los Angeles-based.

But naturally, it made a whole shitload of sense for them to spend time in Los Angeles: not only was their manager and hotelier, Kirk Biglione, living there, but it was where all of the record labels were based. Playing a lot of gigs in Los Angeles was how they got the Genius Records deal, and it was how they were going to get the next label deal, now that the relationship with Genius was deteriorating.

And it was one of those gigs which led to the The Miss Alans making their only music video: “Crushed Impalas,” a song that was written about how Los Angeles could drew people to it and then swallowed them whole.

I’m pretty sure that Linda Cohen didn’t think going to see The Jazz Butcher in Long Beach was going to be a life-changing experience, especially since she assumed that she could skip most of the opening band. Also, who has life-changing experiences in Long Beach? Except, of course (why else would I be telling this story?), that opening band was The Miss Alans. She was impressed enough to find out where they were playing the next night, and called the venue (The Roxy) to try and get more information. As it happens, they were doing their sound check, so the phone was handed to Kirk.

Which, for some reason, turned out to be a good idea, so Linda started going to see the band during those L.A. shows — Kirk’s joking introduction of her to the band was “meet your new manager” — and at some point, the idea of doing a music video was floated. Linda was working in the film industry, and called in a few friends, and “Crushed Impalas” was chosen.

Anchored by a huge sliding bass figure from Jay, “Crushed Impalas” — the title coming from a conversation about monster trucks at a Tommy Burger — was different from the rest of the Hollywood Demos: it was slower, groovier and featured almost no lead guitar pyrotechnics. But it was also catchy as hell: especially Scott’s singing, way up above his comfort range, which added extra frisson to the whole thing.

With Scott and Manny’s guitars biting in unison over a spare, funky bassline, the chorus of “Crushed Impalas” was weird and catchy, and at the same time harkened back to earlier dance-pop days, but with a much bigger rock and roll sound. The overall effect was mesmerizing and hypnotic.

Man, Mr. Pigskin, crumbly nails beet drunk nose
Rug sack zombie stare
And heroes, we don’t want them anymore
Because here’s where they all belong
In a dirty song 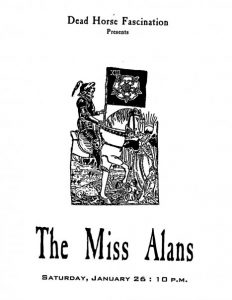 The video for “Crushed Impalas” was filmed the weekend of January 26-27, 1991 — with The Miss Alans playing a gig the night of January 26 at the same pisshole they performed the “live” part of the video.

For The Miss Alans, it was a weird combination of “cool, we’re doing a video” and “oh shit, we’re doing a video,” as the filming alternated between scenes of the band wandering the streets of downtown Los Angeles, mucking about with props procured from Kirk’s house, the band performing topless while having words and images projected onto them and a good old standard miming the song onstage.

Casey said to me “I don’t believe in Jesus Christ”
He left me there
Neon plastic boots rubbery arm without any home
And Big Tommy Blue Bright Star
Cracked my funky skull lighter
And he talked big
And where in the world do I come from?

While filming the topless sequences, they were all slathered with white makeup in order for the projected images to show up better, and when they broke for lunch, were wandering the streets of downtown LA like goths accidentally let loose in the daytime. Though good lord, I hope they at least put their shirts back on.

While there really isn’t currently a hi-res version of the video currently in the wild, cinematographer Adrian Velicescu short most of it in black-and-white and desaturated purple hues, giving it a striking quality while alternating the scenes of the band mucking around in the streets with onstage performances that more than hinted at what kind of great live band they were.

I think that the lyrics for “Crushed Impalas” are fucking brilliant, perfectly capturing the sense of disorientation that The Miss Alans must have felt trying to make their way in a home away from home that wasn’t really even a home.

After that breakdown, the guitars of “Crushed Impalas” spend most of the rest of the song, just playing its main riff over and over and over, biting and snarling and fussing and fighting over Jay’s spare & funky bassline, like if maybe they keep a groove going everything will be all right.

But nobody let Scott know that, so he heads into the last verse, completely disoriented:

Casey said “Hey look I’m hooked
And it doesn’t light me up anymore”
With a brass attitude bumbling street marble dance
I’m the King of Honkey Tonk
But where in the world do I call home?
Content in a world of dirty bottomless tooth blondes
And steady alcohol
HOLLYWOOD!

“Crushed Impalas” has my favorite Scott Oliver vocal performance: slurring his voice at the very edge of his range, his phrasing all fucked to hell, dislocation and desperation leaking from every single note he sings. I totally dig the way his voice breaks on “Don’t believe in Jeeee-SUS Chriiiiist,” the deadpan “Truck. Truck. Truck.” And of course the awesome near-falsetto yelp of “Haaaaa-leeee-WOOOOOD!” at the end.

As the only song from the Hollywood Demos to make it out in the world, “Crushed Impalas” probably had the weirdest history of any Miss Alans song, and weirdly enough, is probably the one Miss Alans song that non-Miss Alans fans might know.

Not only was it their only music video, and the only studio track on their second album, the the otherwise live All Hail Discordia, it was also the first Miss Alans song to be used in a film, Hal Hartley’s Flirt. That came about because Linda wrote Hartley a letter along with some music saying how much she liked his films and pitched The Miss Alans to him, and he enjoyed “Crushed Impalas” so much he put it in Flirt.

Finally, I think it might have been the overarching worry about homelessness and transience captured in “Crushed Impalas” that helped make the next thing the Miss Alans did — All Hail Discordia — so incredibly Fresno-centric.