It is the height of music nerdery to speculate on great lost albums, but I know for a fact that there is a classic album that could have been made from the songs the Miss Alans wrote in the post-Smack The Horse era. 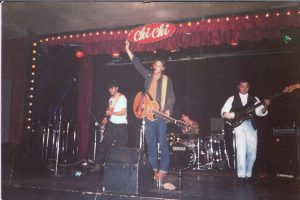 But then, I would totally fund — oh wait, I gotta finally see Hüsker Dü. And for poetic justice, I’ll see them on the night in San Francisco when I instead went to San Francisco to see The Miss Alans at the Chi Chi Club. And if for some reason, I happen to run into myself, I’ll just nod and say “time machine” and keep walking.

And so after doing those things, and seeing that All-Star game where the National League’s starting outfield was Willie Mays, Hank Aaron & Roberto Clemente, I would then fund the Miss Alans lost album, which I’m going to call Truck, which is totally not what Scott would have titled it.

And it would have this track listing:

I think that would make one hell of an album, one the absolute indie classics of 1991, which is already my all-time favorite year for music. It would have been in my top five albums for that year, just after Girlfriend and just before Bandwagonesque. (My top three for that year were Nevermind, Achtung Baby! and Use Your Illusion II. Like I said, an amazing year for music.)

There would be two singles with non-album b-sides:
“Crushed Impalas” b/w “Save It For Later”
“I Love Airplane Noises” b/w “Flame” and “The Shiny Unfeeling (Live at The Blue)”

And, of course, the All Hail Discordia album would still be recorded, the highlights of which would be a promo-only companion piece, like Matthew Sweet’s Goodfriend, and eventually the whole show would be part of the 2016 box-set reissue.

And in that timeline, one of the highlights of Truck would be the highlight of All Hail Discordia would still be “I Love Airplane Noises,” one of their big anthemic U2-ish songs, and a contender for The Prettiest Song Ever Written, Miss Alans Division.

For some reason, I always thought “I Love Airplane Noises” had some inspiration from those nights we used to drink sake bombers at Tokyo Gardens. Basically we would order shots of sake and bottles of Sapporo (Tokyo didn’t have it on draft), pour the Sapporo into a glass and then drop the sake into the glass, chugging the whole thing. And sometimes we’d make airplane noises with the little glasses of sake before dropping them into the glass. Thus, “I Love Airplane Noises.”

Nope. Not even close.

Starting off with Manny making the titular airplane noises with his guitar, “I Love Airplane Noises” is about realizing that you’re happy for an ex who has found somebody else more suitable for them — a incredibly healthy attitude to have in our social circle — which is what happened to Scott when he heard an airplane, looked up into the sky, and got the inspiration the lyrics in his long, arcing, utterly gorgeous chorus:

I didn’t know any of this until recently, and and in fact always heard that chorus as “a thousand jet wipers” — I guess I pictured windshield wipers on a squadron of planes or something — and I loved “I Love Airplane Noises” because of the exquisite melody of that chorus. Also exquisite: Ron Woods’s drum part on that chorus, where every fourth measure he delays his snare until the four instead of the three, helping to make the whole song even bigger.

In the middle, there’s a short super-cool guitar solo from Manny, who abandons the airplane noises long enough to toss out a series of Verlaineish notes, playing hide-and-seek with Ron’s drums, which tumble around the solo like clothes in a dryer.

And there’s a nice little trick where Scott rhymes words to the same melody across different verses. In the first verse, he sings: “He trips over pleasure and picks up some” and then rhymes it in the second verse with “He calls her his treasure, so she treasures him,” breaking his voice around the rhyming words.

That said, Scott isn’t particularly fond of his vocal on this version, and both he and Ron both thought that “I Hear Airplane Noises” would have worked particularly well in the studio, and I have no doubt the version in the alternate timeline I created above turned out pretty killer: the first Miss Alans hit in the wider world.

Unlike “Coke With Fatty” and “Earwig,”, “I Love Airplane Noises” is a rare happy lyric in an otherwise dark lyrical period. But like those songs, there’s a undercurrent of worrying about aging in the lyrics of “I Love Airplane Noises,” though in this case, “I’m a man growing old” could also be interpreted as coming to terms with one of the better things about aging: the maturity and acceptance that comes with experience. Of course once again, looking back on that from the perspective of our mid-50s, it seems silly to have worried about growing old in our late 20s, but I’m guessing that’s kinda universal. Like loving airplane noises.