The Miss Alans went out on tour around the time that Blusher was released in the spring of 1994, opening for a band called Medicine, a band once called by Pitchfork as America’s answer to My Bloody Valentine, whom I don’t recall as asking any questions of us beyond “are you ears bleeding yet?” And they already knew the answer to that one.

In any event, Medicine was working some of the same territory as The Miss Alans, but with way more noise and way less pop, and I recall thinking that they were OK when I drove up to San Francisco to catch the show at the end of the tour. 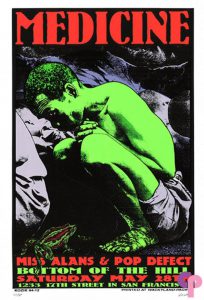 It was going to be one of those nights — one of many nights, really, over the years — where there was going to be a high-speed late night trip back down the spine of California, desperately trying to get to bed before the dawn wanted to wake us up.

The only problem was that just as I pulled up to the Bottom of The Hill, the brakes on my raggedy VW Fox stopped working properly. Not completely, just not properly, making a huge screeching noise, to boot. That was going to be a problem, as I had no money to fix them, and no place to stay, so I stuck with my decision to drive back home, figuring that I really didn’t need my brakes all that much on the freeway anyways.

Meanwhile, the Miss Alans had been to Texas, Utah, Colorado, Washington & Oregon before ending up in San Francisco, and, Manny at least, wanted to get the hell home. So I either persuaded him or he volunteered to drive back home with me, but we had to go to his hotel — in the Tenderloin, of course — to get his stuff first.

So I have this vivid memory of driving down Market Street, brakes screeching like a My Bloody Valentine song every single time I applied them, thinking that everybody on the street was staring at us, which maybe they were at every single stoplight. And I remember feeling utterly relieved when we got his shit and finally got on the Bay Bridge, knowing that it was late enough that it wasn’t likely we’d have to stop again, which I don’t think we did until I dropped Manny off at his home and limped back to my Tower District apartment, knowing that I was going to have to get those brakes fixed before we drove back up to San Francisco the next weekend to see Big Star.

440 Coronet, that’s your name and
The red pinstriped heels and silver paint
Shinin’ like a pearl

I look back at that now, properly aghast, and knowing it wasn’t even the stupidest thing we did back in the days when we were supercharged. 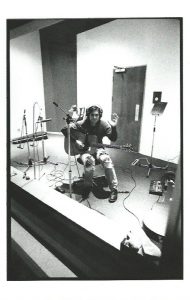 “Supercharged” was one of the last things recorded for Blusher, after Zoo Entertainment decided to pay for them to go back into the studio and record “Victoria,” they also were efficient enough to record also record the dynamic “Eldorado” and the quieter “Supercharged,” the first of a pair of car songs that were more than just car songs.

In the case of “Supercharged,” it’s really the newly sober Scott looking at his past and marveling at not just all of the trouble he got into when he felt invincible, but maybe also a bit of relief at having survived it all with wits intact. 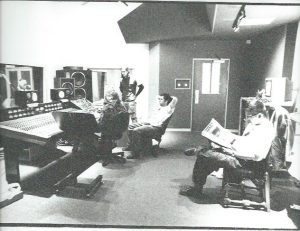 With Ron having the idea to play with his snares turned off (snare drums have a series of wires underneath that, when tightened, i.e. turned on provide the bright bold sound that to me is one of the key components of rock ‘n’ roll), and producer Tracy Chisholm suggesting using maracas on the verses, but leaving the chorus un-augmented — which Scott was totally, utterly and completely against . . . until he heard the results — “Supercharged” is a masterpiece of restraint.

It’s all there in the chorus: Manny has been content to be in the background, playing a couple of notes over Scott’s quietly aggressive acoustic rhythm, but then just as you’d expect Scott to sing the first chorus, Manny steps out and sings it with his guitar before Scott joins him for the second pass.

In the days
When we were supercharged

After the second chorus, the guitars get louder and fuzzier, and Scott goes into a lovely falsetto and sings what the lyric sheet claims as “Oh my looooooooooove” and I’ve always heard as “hotwiiiiiiiieeerrrrred,” which among my misheard Miss Alans lyrics is at least thematically appropriate.

That’s followed by one last extended chorus, which keeps up the intensity and noise, until “Supercharged” finally drifts off into the night, tail lights fading in the fog.