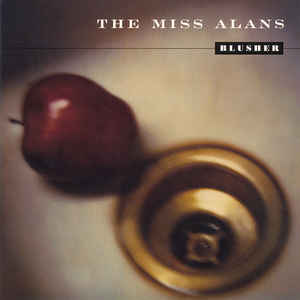 Ron Woods has an unorthodox drum set-up. For one thing, it’s backwards! His hi-hat and snare drum are on the right instead of the left, what even is up with that?!?

In truth, I’ve always assumed that the best thing about being a left-handed drummer is that it makes it impossible for other asshole drummers to just sit down and start playing your drums, as I know — and Ron most certainly knows — I would have done many many times over the years. 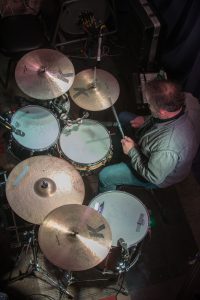 That said, there are two things that are unorthodox about his set up — which goes back to the Wayne Foundation days — both of which contribute to his sound. The first is the placement of his ride cymbal, which is mounted directly on his kick drum instead of a second tom. Like Clem Burke (who actually has a separate stand for his ride cymbal) or Karen Carpenter. What this means, of course, is shorter, tighter rolls, rather than thundering round his kit like Keith Moon or Neal Peart. So when he does take off, like on “Angel Death Blues” or “Save It For Later” it’s focused on the snare and the one tom.

The other, of course, is the mounted tambourine, which has helped define and color things like the opening to “The Indifference” the verses of “Marilyn Buried” and the 3/4 (or is it 6/8) time signatures of “Westchester, NY #105” and “Otis Plum” and just after the chorus of “Mag Wheel,” my favorite song on Blusher, and a top 5 Miss Alans song for me.

Fading in with a Leslie shiver as Scott, Manny & Jay slowly circle each other, it takes a hot second for “Mag Wheel” to kick in, which it does with a thwack! of Ron’s snare, and after that it’s off to the races, as Scott uses road metaphors to sing about moving forward with his life after getting sober.

I wanna
Hollllllllllllld you
I wanna
Feel the grips of
All the bits, bits and pieces
Of this crumblin’ relationship

“Mag Wheel” isn’t just the catchiest song on Blusher, the song that might have been the most natural single — I mean, outside of the fact that the phrase “Mag Wheel” is never used in the song even once — it’s also one of the more muscially uplifting songs in the entire Miss Alans catalog, especially during the chorus.

It’s a short, simple chorus, but there’s so much going on with it: first off the high harmonies — which I think are Scott overdubbing himself — andh Ron providing a subtle back-beat during the “be my friend” part, and then riding his tambourine like a high-hat during the instrumental portion of the chorus while Manny throws out subtle little curlicues of lead guitar over an organ overdub (also Manny) — one of the rare times they had any keyboards on their songs.

Having the chorus continue as an instrumental for a few measures was one of their latest songwriting tricks, and would come to be a key part of the batch of songs that made up Ledger. And and it instantly became one of my favorite Miss Alans things: a well-oiled machine moving inexorably forward, even if — or perhaps because — Jay & Ron had a huge disagreement over the tempo of the song at first.

Also: I’ve also loved “feelin’ just like a junky born” because it’s so totally clearly not about drugs, which, as Scott jokes, ruined a perfectly good drinking problem, but rather uses addiction as a metaphor about how much he was enjoying being clean.

There’s also a short breakdown, after which Manny rips off a pretty cool little guitar solo, and Scott finishing up his lyrics with — and I quote — “Yeah, yeah, yeah, / Yeah, yeah, yeah”, an almost unconscionable amount of positivity, all things considered.

Not because things were necessarily bad in 1994, but it will always loom as a transition year for me, as it was the year I left not just Video Zone, but Fresno, as well, moving up to Bay Area in June, instinctively knowing that the online world in which I had begun to immerse myself was going to end up being my career, if I could just be in the right place at the right time.

And by that time, there had been a series of deaths that affected me: the Wild Blue closed, Video Zone was sold and Kurt Cobain killed himself. Obviously, that last one didn’t affect me personally, and yet it did, and so I got the hell out of Fresno while the getting was good (not that Fresno didn’t try to keep me there: there was an attempted reformation of The Bridesmaids, as well as a job interview at Pollstar, both of which I just let go).

And as I’m making this decision the record that is the soundtrack to my life is Blusher, which was released on April 12, 1994, right around the time I came to the realization it was really now or never, I just had to decide. There are numerous references to the album, and especially “Mag Wheel,” — which instantly became my favorite track on the record — all over my journal entries from that time.

Also having life-changing events: The Miss Alans, who were dropped by Zoo Entertainment near the end of the year. And for Scott Oliver, sober for well over a year and newly engaged to boot, it was kind of a sign: he’d had a job opportunity on the other side of the country, and decided to take it. I remember hearing about it at what I think was a New Year’s Eve 1994 party at Ron’s house, and not being terribly surprised to hear the news, and not terribly sad, either, as I was still emotionally distancing myself from all things Fresno, and not having one of my very favorite things about it exist anymore was going to help in that process.

(I also remember getting into a pretty serious discussion with Ron about Bill Berry’s drumming on Monster and the preceding R.E.M. albums: my point was that Berry had become more invisible in the 90s and wasn’t as important to their music and Ron thought I was full of shit. Weirdly enough, we were both right: as R.E.M. continued on without Bill Berry after he left in 1997, but since they were never quite the same, Ron was probably more right than I was.)

And so, in April of 1995 — which is somehow 23 years ago, how is that even possible? — the Miss Alans played their last gig: at Club Fred in Fresno, fittingly enough. I don’t really recall it as being a sad situation or anything: they’d had a great run, made some great music, and we all had some great memories.

If their story had ended with that final gig, not bad, all things considered — most of us never got to make any records, much less four (including Bus) — and they could be proud of what they had accomplished during their run.

But, of course, it didn’t end there.