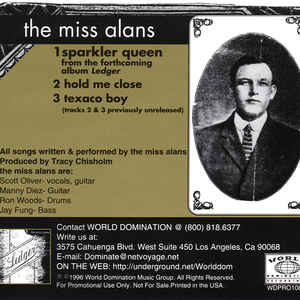 So way back — last week? month? year? — when I was writing about “Crushed Impalas,” I mistakenly said that the song’s appearance in Hal Hartley’s Flirt was the only time the Miss Alans music had been used in a film.

That was an error, and as you can imagine, the discovery of that error caused huge a kerfluffle in the Home Office. The result of that kerfluffle was the entire fact-checking department being sacked after a scathing report from the Medialoper Ombudsman, Bud Mann.

As it turns out, in Linda Cohen’s post-Miss Alans career as a Music Supervisor extraordinaire, she’s occasionally placed their music in films, the most prominent of which was the 1999 indie, Chutney Popcorn, which featured the Miss Alans’ shoulda been a massive hit single, “Sparkler Queen.”

One of the ironies of Ledger is that I think it’s filled with songs that would have made great singles, and there is definitely a universe where “Sparkler Queen” is quite possibly the biggest song The Miss Alans ever did. At the very least, I’ve now realized that it’s in my Top Ten Miss Alans songs, which are as follows:

Starting off with a twist and twirl of Scott’s acoustic guitar and a quick little lick from Manny, “Sparkler Queen” is richly textured from the very start, with Jay & Ron providing needed forward momentum underneath the opening verse.

In a hole that you filled a million-fold
You fell far, so I caught you with my car
Just below, just below lies a beautiful nickel
It shines so bright
Like the sparkle in your eye

Wait, wait, wait. Is that a love song? There weren’t a lot of those in the Miss Alans catalog (“This next song is a love story. Heh, I know. We put it in the set anyway“), and I’m not sure I’ve written about any of them in the near-century I’ve been writing these posts. Which, of course, says as much about me as it does about the Miss Alans. But “Sparkler Queen” blows right past my wall of cynicism with a chorus as lovely and direct as anything they ever did.


And of course, the other thing that “Sparkler Queen” had: a big, beautiful Manny Diez guitar hook. On the chorus, it soars over a pretty & melodic Jay Fung bass run, echoing Scott’s vocals. Later in the song it alternates the soaring with what crying from what seems like sheer happiness; impossible and lovely all at the same time.

All of those things, plus lyrics that mapped back to the title of the song(!) contributed to “Sparkler Queen” being a great single on every level except the most important — nobody heard it. That’s of course, for reasons that we’ve discussed ad nauseam.

Of course that’s not entirely true: like I said, it ran over the end credits of a well-regarded film about an ground-breaking subject — there weren’t a whole lot of films about Indian-American lesbians in 1999, or now, probably — but it wasn’t a popular film, and it came out three years after Ledger, so “Sparkler Queen” wasn’t going to become a freak hit or anything, but it does mean that there are random people out there who’ve heard and probably liked this song without knowing much more about it.

In any event, songs like “Sparkler Queen” is why I’ve been telling my music-loving friends who don’t know about the Miss Alans but follow me online that the place they should start is Ledger.


“Sparkler Queen” over the end credits of Chutney Popcorn