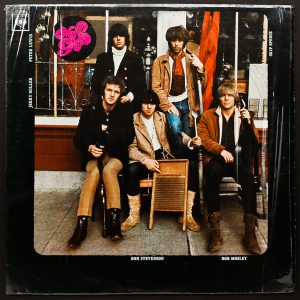 I’m sure that was part of the whole Columbia Records reasoning about releasing five singles on the same day, but all it did was confuse the marketplace, like when multiple performances for the same TV show get nominated for “Best Supporting Actor” at the Emmys. Which was how a song as powerful as “Omaha” kinda got lost to rock history.

And in fact, as late as the mid-1980s, I’m pretty sure I’d never heard any Moby Grape songs, as they were just the stuff of myth and legend, their albums long out of print and the major reference being Tom Verlaine saying that Moby Grape broke up on a night with a full moon, so Television decided to do the same. Is that even true about Moby Grape, or was Verlaine doing his own myth-making?

In any event, I’m pretty sure the first time I heard “Omaha” was Michael Stipe singing it on the Golden Palominos Vision of Excess album, which looking back, definitely conveyed the form, structure and melody of “Omaha,” but totally ignored the manic energy of the original song.

And, listen my friends, “Omaha” is all about manic energy.

As written by rhythm guitarist Alex “Skip” Spence, but driven by drummer Don Stevenson — the one who casually (and scandalously) draped his middle finger over a washboard during the the album cover’s photoshoot — “Omaha” is a wild combination of late-60s garage rock drive, a big pop hook, three guitarists trying to outdo each other, and the sound of five dudes singing all together but not quite hitting the harmonies.

After every single verse, Spence, along with Jerry Miller and Peter Lewis, would take off for a bit, then abruptly stop, leaving Stevenson skittering and sliding into the next verse. Over and over and over again this happens in “Omaha,” though finally at the end, Stevenson gets wise, and circles back around the beat and then build “Omaha” to its end.

Not so long after the Golden Palominos album, I found Moby Grape’s debut album, at that antiques store in Clovis where I’d previously found Led Zeppelin bootlegs and John Coltrane albums. It wasn’t in the greatest of shape, if I remember correctly, but I was still glad to own it.